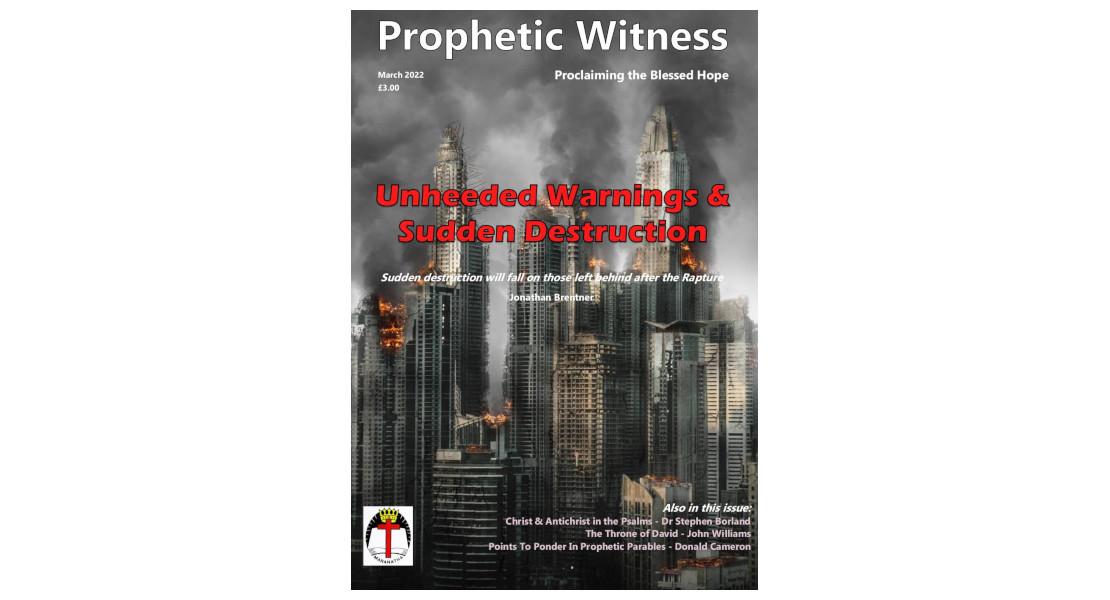 As Mount Saint Helens rumbled during the spring months of 1980, one man stood firm in is resolve to remain on the mountain. Harry R. Truman, an innkeeper, refused to leave his home despite an evacuation order and repeated warnings that came via reoccurring earthquakes.

He acknowledged it was ‘possible’ the mountain might ‘blow’ someday, but he never reached the place where he was wiling ‘to pack up his bags' and leave his home.

On May 18, 1980 Mount St. Helens erupted with such force that the top 1,300 feet of the mountain instantly disappeared. The explosion caused a huge landslide that moved down the mountainside at speeds in excess of 110 miles per hour, devouring everything in ts path, including the residence of Harry R. Truman at Spirit Lake.

Why mention a stubborn old man who refused to heed the warnings of impending disaster? Because he epitomizes so many in our world today, Just like Mr. Truman, they hear the warnings of Biblical prophecy and sense the danger inherent in our day, but they do not turn to the Saviour or watch for His appearing.

The Lord is not silent during these last days. The signs of the last days are far too numerous to describe in any one post. The first significant indicator of the last days occurred on May 18, 1948 when Israel became a nation in fulfilment of Isaiah 66:8. (President Harry S. Truman led the way in recognizing Israel as a nation.)

Jump ahead to 2020, and we see the world government of the tribulation springing to life before our eyes along with the technology necessary for the antichrist to enforce the ‘mark of the beast’ under the penalty of death. The lawlessness and violence of our day, coupled with the multitude of signs, repeatedly warn us of the approaching devastation and death of the coming day of the Lord.

Like Harry R. Truman, many believers are not yet willing to ‘pack their bags’ in anticipation of Jesus’ imminent return They do not recognize the urgency of the day in which they live, and as a result, they live solely for the things of this world without the necessary balance of an eternal perspective.

For many saints, the fault lies with their shepherds who have long dismissed the prophetic promises of Scripture regarding Israel. They offer Biblical encouragement, but fall to warn people of the urgency of the day in which they live. They repeat the error of the Pharisees and Sadducees who remained blind to the signs that their promised Messiah stood in their midst (Matt. 16:1-4). Just like the religious leaders of old, many today fail to recognize the numerous signs pointing to Jesus’ imminent appearing.

Jesus’ last words to His Church contain the promise of His speedy return. “He who testifies to these things says, ‘Surely I am coming soon” (Rev. 22:20). The word for ‘soon’ in the Greek is tachu, which is much better translated ‘quickly.’ It refers to the swiftness or the speed of an action. The Lord ended His direct revelation to the Church as a whole, with the promise of His quick return for His bride.

We will not have a day or two warning before the Rapture; as soon as we hear the sound of the trumpet, we will forever, be with the Lord. What we already see in our world tells us - that day is exceedingly close.

Just like the devastation that followed the Mount St. Helens eruption, 1 Thessalonians 5:3 tells us that “sudden destruction” will fall on those left behind after the Rapture. ‘After we depart from the earth, the world will experience unspeakable terror that will get far worse during the seven-year Tribulation.

If you have not yet placed your faith in Jesus, please, please do so before its too late to avoid the terror that is ‘coming upon our world. Allow God's Spirit to open your heart to the truth of the Gospel found in the words of Scripture where we read that Christ died on the cross for our sins, was buried, rose from the dead on the third day, ascended to heaven, and is coming again for His Church. Jesus’ resurrection proves that He is able to save all who believe, just as He promised us. John 3:16 says, “For God so loved the world, that He gave His only begotten Son, that whoever believes in Him should not perish but have everlasting life.” This simple verse is the key to living forever.

Faith begins with an acknowledgement of our need for Jesus’ payment for our sins upon the cross. Romans 3:23 says: ‘for all have sinned and fall short of the glory of God.” Our need of a Saviour is universal. Because all have sinned, everyone needs Jesus (John 14:6); there are no ‘exceptions. He alone paid the debt for our sins.

Some mistakenly think they can compensate for their sins with good behaviour. In Ephesians 2:8-9, the Apostle Paul tells us that such is not the case: “For by grace you have been saved through faith, and that not of yourselves; it is the gift of God, not of works, lest anyone should boast.” Eternal life comes by grace through faith; saving faith rests solely on Jesus and His sacrifice for our sins.

If you depend on your own goodness or behaviour for eternal life, you will fall far short. You will remain behind when Jesus comes for His Church.

If you reside securely in Christ, please know that you have little time left in this world. I wrote about the lateness of the hour before Jesus’ appearing in: ‘One Minute to Midnight’ ‘Not Now, I Have My Life To Live’ and ‘The Beast at Our Door’ - (go to jonathanbrentner.com). The Rapture is so close.

When Jesus comes for His Church, all who belong to Him will receive a glorified body (Phil. 3v20-21), no exceptions. in John 10v27-29, Jesus said this about all those who come to Him, “I give them eternal life, and they will never perish, and ‘no one will snatch them out of ‘My hand." However, our security does not eliminate our need for watchfulness and readiness (Matt. 24:44 and 25:13).

Paul referred to a “crown of righteousness" reserved for “all who have loved His appearing” (2 Tim. 4:8); a special reward exists for those eagerly anticipating Jesus’ return to take us home.

As for readiness, the apostle John wrote, “And now, little children, abide in Him, so that when He appears we may have confidence and not shrink away from Him at His coming” (1 John 2:28). Carelessness in our walk with Jesus will not keep us from heaven, but it may cause embarrassment for us when He appears.

THE BLESSEDNESS OF BELIEF

The fierceness of Satan's attack on the book of Revelation knows no bounds. He works day and night to rob believers of its comforting message that assures them of deliverance from the coming seven-year Tribulation, as well a the eventual punishment of the wickedness and violence so prevalent in our day.

The blessing Jesus promised us in Revelation 22:7 also comes from knowing that God remains totally in control all our tomorrows, regardless of what comes our way, of the violence and chaos that envelopes our world. In Psalm 46:10 the Lord promises that He will be exalted ‘among the nations.” The Apocalypse provides the details of His judgment of sin that paves the way for His exaltation that we read about in Revelation 19-20. There's no genuine imminent hope for those who dismiss the prophetic signs of the day in which we live; only the fleeting hope that somehow life will return to normal in the future. They cannot see how the ‘Great Reset’ championed by the elite of our world, might lead to the kingdom of the Antichrist, just as John wrote about in the book of Revelation. Those of us who understand the warnings of Revelation, know that the judgments described on its pages are not only possible, but imminent. Unlike the Pharisees and Sadducees of Jesus’ day, we recognize the signs of Jesus’ return, and we look up in anticipation of His appearing to take us to the place He is preparing for us in his Father's house (John 14:1-3). It does not get any better than that!

The tale of Harry R. Truman warns us of the folly of ignoring the prophetic signs that tell us we indeed live in the last days. Just like the eruption that suddenly consumed the top of Mount St. Helens, so the day of the Lord will bring sudden devastation to this world, and to those who now reject the saving message of the Gospel. They will be left behind to face the day of the Lord.