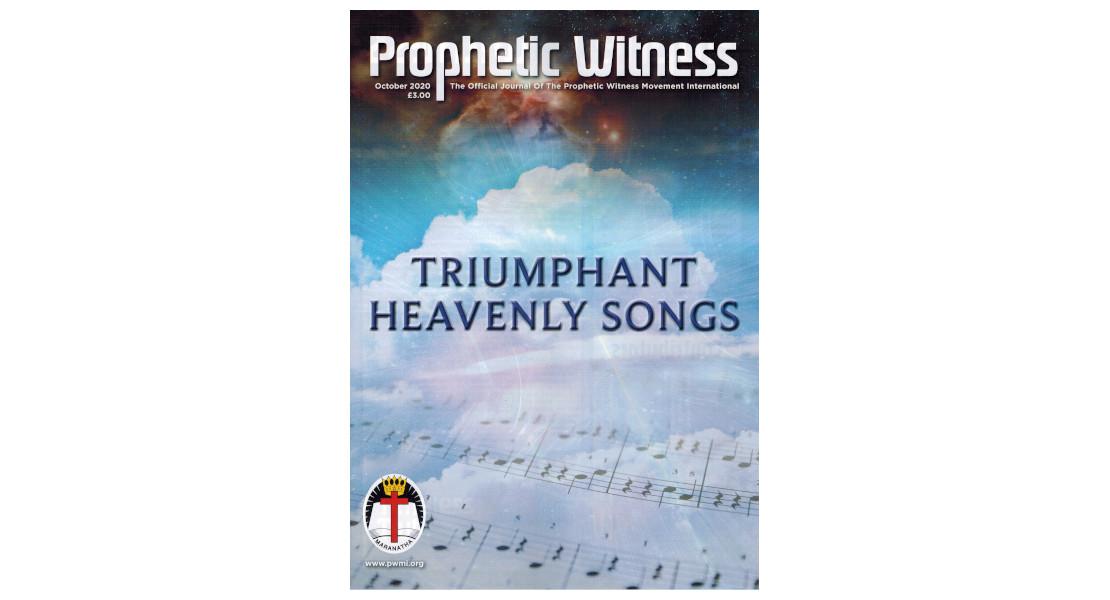 Singing plays a far more prominent role in the book of Revelation than in any other book in the New Testament. As the Revelation of Jesus Christ unfolds, these songs celebrate God’s greatness as the Creator and Jesus Christ’s redemptive work on the cross. This is accompanied by new heavenly songs of rejoicing that focus on the themes of worship, worthiness and thankfulness.

The apostle John witnesses spectacular scenes of praise and worship, which gives a foretaste of the worship we will enjoy in our heavenly home.

The first song celebrates God’s holiness, omnipotence and eternalness. It is sung constantly by the four living creatures who encourage worship and adoration whilst proclaiming the holiness of God. The opening line of this song: “Holy, holy, holy is the Lord Almighty” is taken from Isaiah 6:3.

“Holy, holy, holy, is the Lord God Almighty, who was and is and is to come.” (Revelation 4:8). At this point the twenty-four elders lay down their crowns before the throne and sing: “You are worthy, our Lord and God, to receive glory and honour and power, for You created all things, and by Your will they existed and were created.” (4:11).

The second song of worship is directed to Jesus Christ and celebrates His worthiness to open the seven seals. No one is found worthy to open the seals in the whole of heaven or anywhere on the earth. This distresses the apostle John, until one of the elder’s points out the only person who is worthy - Jesus Christ. “See, the Lion of the tribe of Judah, the Root of David, has conquered, so that He can open the scroll and its seven seals.” (5:5).

Jesus Christ then becomes the primary focus of worship by the four living creatures and the twenty - four elders, who bow down before Him. Holding a harp and a golden bow! full of incense, which are the prayers of saints, they rejoice by singing this new song. The Greek word “kainos” means ‘fresh’ or ‘a new kind.’ (The KJV New Testament Greek Lexicon)

“And they sang a new song, saying: ‘You are worthy to take the scroll and to open its seals, For You were slaughtered and by Your blood you ransomed for God saints from every tribe and language and people and nation; You have made them to be a kingdom and priests serving our God, and they will reign on earth." (5:9-10).

The third song is another worship song, which exalts the Lord Jesus Christ, but this time there is a huge increase in the size of the heavenly choir. Ten thousand was the largest single number used in Greek, so thousands upon thousands, and ten thousand times ten thousand (NIV) or myriads of myriads (NRSV) is the authors way of calling them innumerable. This vast number of angels surrounding the throne, join with the four living creatures and twenty-four elders, “singing with full voice, Worthy is the Lamb that was slaughtered, to receive power and wealth and wisdom and might and honour and glory and blessing!” (5:12).

The fourth song is addressed to both God on the throne and Jesus Christ the Lamb. Jesus Christ who redeemed mankind is placed on an equal footing with God as worthy of all praise. ...

Powerpoint - from Richard Salmon
From The Editors Desk
Triumphant Heavenly Songs
Signs Of The Times
Pre-Tribulation Signpost - Pre-Millennialism
From Our Israel Desk
Optimism Pessimism: We May Be In For A Wild Ride - But God Is In Control!
Standing Order Form
In Touch
Four Horsemen Cast Long Shadows
Our Statement Of Belief
Christians Are Appointed To Salvation - Not Wrath
What Should We Do?
What In The World Is Happening?
Church Branch Listings
What's On
Book Of The Month