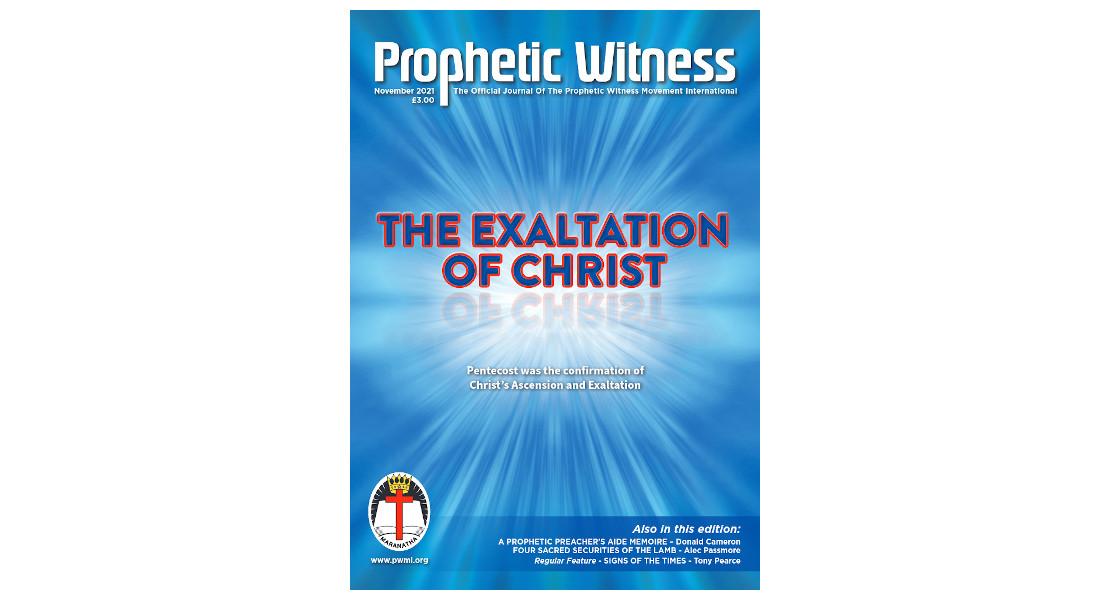 The Exaltation Of Christ

1) HISTORICALLY
The Ascension and Exaltation of Jesus are as much a part of history as His birth, life, death and resurrection. Dr Phil Hammond made a snide comment on the TV. programme ‘Countdown’ - “if Jesus really existed at all.” Yet every time he writes a prescription with the respective date, he is acknowledging the history of Christ, ie. A.D. The angels who announced the birth of the Son of God (Luke 2:9-14) also declared that the same Jesus had gone into Heaven (Acts 1:10-11). The Apostles witnessed both Christ's Resurrection from the dead, and His ascension into the heavens from Mount Olivet (Acts 1:10-12; Acts 5:29-33). The historicity of the life of Jesus is indisputable, in spite of the spirit of antichrist seeking to deny that Christ is come in the flesh (1 John 4:1-3). Fortunately, the church still celebrates Good Friday, Easter Sunday and Ascension Day as all part of the life of Jesus. Peter speaks of the Lamb Who was foreordained before the foundation of the world, but was manifested in these last times for us (1 Peter 1:19- 21). We might say, quite reverently, that Calvary was a historical re-enactment of what was an eternal reality.

(2) OFFICIALLY
In his Pentecost sermon, Peter reminds his audience of God's sworn oath to King David that He would raise up Christ to sit on his throne. To confirm the argument, he then quotes Psalm 110:1, which reads: “The Lord said to my Lord, ‘Sit on my right hand until I make your foes your footstool.” Peter ‘then assures the listeners that. “God has made that same Jesus, whom you crucified, both Lord and Christ” (Acts 2:30-36). This Scripture, from Psalm 110:1, is the same one that Jesus used in His reasoning with the Pharisees regarding the identity of the Christ. Jesus asked, “What do you think of Christ? Whose Son is He?” The Pharisees replied, the Son of David, of course. Then Jesus asked: “Why then does David call Him Lord?" That argument brought muted response from the Pharisees, since the natural conclusion ‘was confirmation of the Deity of Christ Jesus (Matt. 22:41-46).

Just as the resurrection was the indisputable proof of Christ's identity (Rom. 1:4), so Pentecost was the confirmation of Christ's Ascension and Exaltation (John 7:39; Acts 2:33). Peter uses the prophecy of David to confirm that not even death and Hades could hold his greater Son, Who is the Resurrection, (Psalm 16:10). Psalm 110:1 anticipates the historic ascension of Christ (Acts 1:9) and by introducing the Divine Oath regarding the Melchizedek Priesthood in verse 4, implies that such exaltation was a just reward for Redemptive ministry on behalf of sinners (Heb. 1:3). This truth is confirmed in Philippians 2:12 - “Wherefore, God has exalted Him”. ie., not in spite of what His enemies had done (Acts 2:23b), but because of what Christ had done (Acts 2:23a).

3) REPRESENTATIVELY
In both Royal and Priestly Offices, Christ acts as Representative. As King, He represents God to man, and as Priest, He represents man to God ‘Whatever Christ did as Son of Man. He did for all those for whom He came to die (Hebrews 2:14). The exaltation that seemed imminent on the Mount of Transfiguration, when the body of Jesus was transfigured (Matt. 17:2). The terrestrial changing to celestial, would have been as singular and individual as the ascension of Enoch (Gen. 5:24) or that of Elijah (2 Kings 2:11-12). Hebrews 15 says that before his translation, Enoch had this testimony. ‘That he pleased God.’ How much more Jesus, in whom the Father was well pleased (Matt. 17:5)!

The whole incarnate ministry of Jesus was not simply to prove that He could personally overcome sin, in contrast to the first Adam. The ‘manifestation of the Eternal Life, which was with the Father, was One that could deal righteously with sin and death (John 1:2 & 2:2). The conversation between Jesus, Moses and Elijah regarding the ‘exodus’ that Jesus should accomplish at Jerusalem (Luke 9:30-31), plus the Father's commendation of His Son (Matt. 17:5), signal His consecration to Priesthood. As Paul says: “Therefore, just as through one man [Adam] sin entered the world, and death through sin, and thus death spread to all men, because all sinned’ and: "For as by one man’s disobedience ‘many were made sinners, so also by one Man's ‘obedience many will be made righteous” (Rom. 5:12 4 19). In the 5th chapter of Romans, Paul contrasts the federal headships of the first Adam and the last ‘Adam (Christ). The first Adam was created from the ‘dust of the earth and was offered dominion through fellowship with God (Gen. 1:28 & Psalm 8:6). However, through disobedience, he sought dominion without Divine fellowship, which resulted in death for him and all his offspring who were in him embryonically (Rom. 5:12). The last Adam was the Lord from Heaven. who adopted the form of a Servant and humbled Himself even to the death of the Cross (Phil. 26-8 & Heb. 2:14-16). At the Mount of Transfiguration, Jesus could have ascended as the Perfect Sinless Man; but after Calvary and the resurrection, He ascended as the Perfect Sacrifice for sin (Heb. 10:12-13).

Powerpoint
From The Editor's Desk
In Touch
The Exaltation Of Christ
Our Statement Of Belief
Four Sacred Securities Of The Lamb
Signs Of The Times
Zephaniah 3:10-20... An Exposition (Part 6)
A Prophetic Preacher's Aide Memoire
From Our Israel Desk
Is The Rapture In Matthew 24?
What in The Word Is Happening?
What's on
Book Of The Month