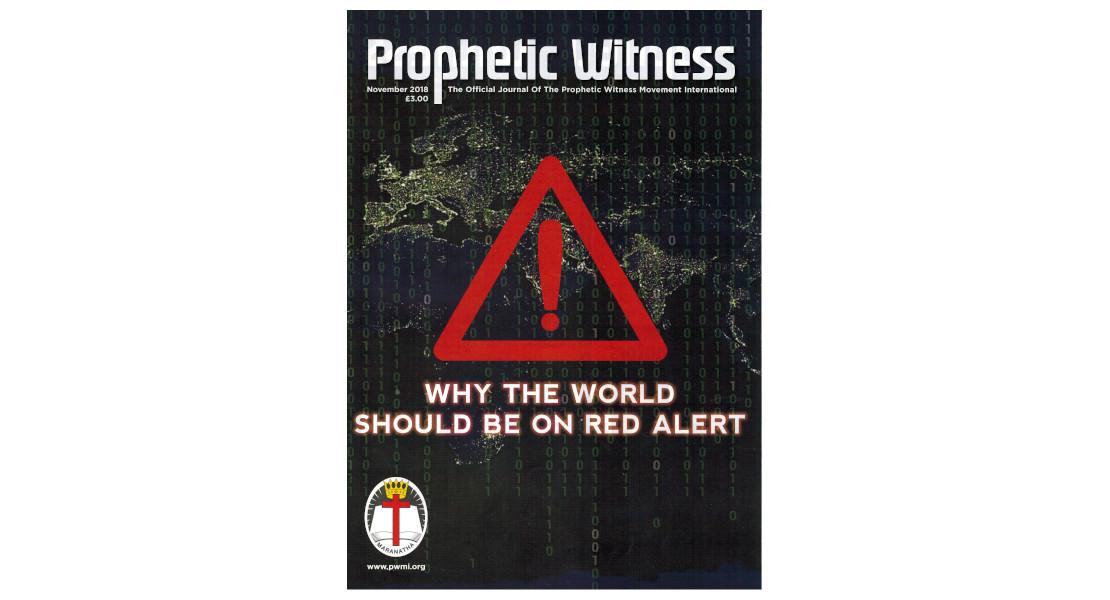 WHY THE WORLD SHOULD BE
ON RED ALERT

When we watch news of natural disasters, political turmoil, an ever more dangerous society, the near total apostasy of the nominally Christian church and the mass acceptance and promotion of perversion, we wonder: ”what in the world is going on?”

The answer is simple: Bible prophecy is being fulfilled in these final days of the times immediately prior to our Lord's return. This is a reason for excitement and expectation, not doom and despair.

This is the greatest story seldom told, as the remnants of what used to be called "the news media" concentrate on titivation and trivia. We are being entertained to death, spiritual death.

I was recently in Sky television's London headquarters and saw a promotion for a new programme, A Discovery of Watches, featuring: “daemons, vampires. witches and forbidden love.“ To proceed through this building you had to pass through swing gates, with labels such as "daemons," “vampires" and so forth. At the far end was one marked “humans," which I walked through.

So, faced With an occult onslaught on all sides, a Prime Minister pushing for little children to be allowed to "choose their sex" and occult games played on devices by many of our young people, there is no surprise that we have produced the most mixed up, muddled and deceived generation in recent history.

The church at large not only fails to teach against the occult but often practices it! We once published a picture of a church fete where an attraction was a fortune teller complete With crystal ball! No doubt the church roof fund benefitted...

Powerpoint - from Jon Ikin
Why The World Should Be On Red Alert
Our Statement Of Belief
Nahum 3:1-19
Christ In Prophecy
From Our Israel Desk
Faithful Servants Inherit The Millennial Kingdom
Certainties And Uncertainties In Revelation
In Touch
Signs Of The Times
Church & Branch Listings
What In The World Is Happening?
What's On
Book Of The Month