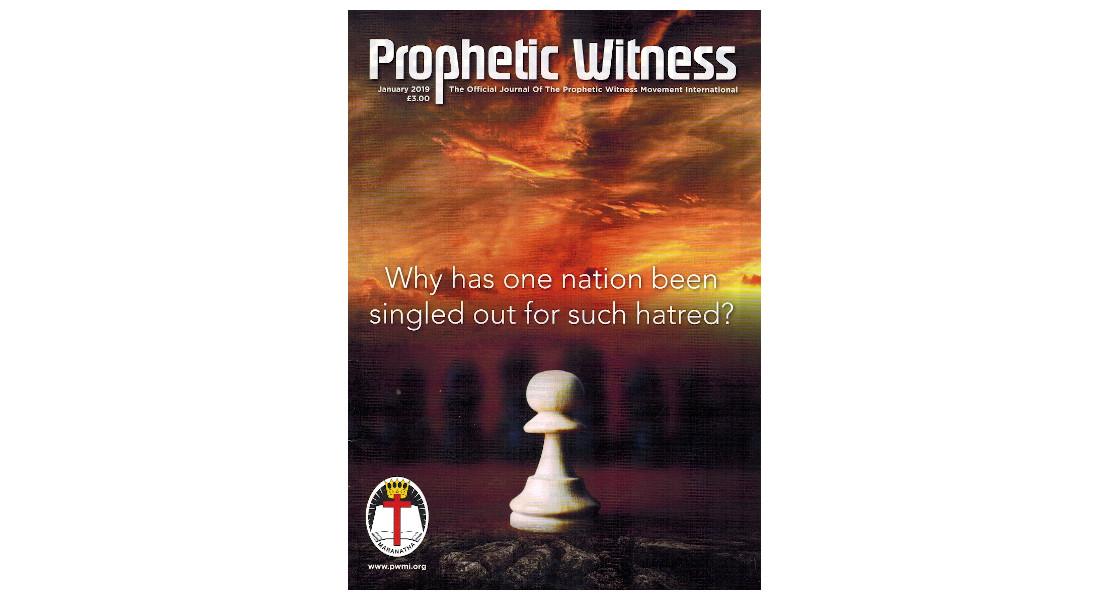 Why Has One Nation Been Singled Out
For Such Hatred?

Many Nations on earth experience persecution at some stage, but no other in history has suffered like Israel, explains retired Elim minister Mervyn Tilley.

The big question is this: why should one nation be singled out for such treatment? In this sense, antisemitism is so irrational. It just doesn't make sense, given that Jewish people are made of the same stuff as every other human being.

So why antisemitism? There are at least three reasons that could be given:

1. God chose Israel to be his own special people. And whatever God is for, Satan is against. Jealousy began with Ishmael who was overlooked in favour of Isaac. Jealousy took a further hold through Esau who was also overlooked in favour of Jacob. To spite his father, Esau married a daughter of Ishmael. From Esau came Edom and the Edomites. Then Esau's son had a concubine named Timna and from her came Amalek which became one of Israel's fiercest enemies.

2. Israel rejected God by having Jesus crucified. This was seized upon by large sections of the Church from early days and this is where replacement theology came from. In other words — God rejected the Jews because they had rejected Jesus.

3. A massive propaganda exercise by the Palestinians ~ with a successful disinformation programme which the world has swallowed wholesale. In fact, Palestinian Liberation Theology has de-zionised the entire Old Testament and replaced it with a Palestinian narrative.

The world finds it convenient to buy into this narrative because the Jews are ‘different’ and generally resist assimilation. This was one of Haman’'s arguments when he plotted against the Jews during the time of Esther. But all of this came about because God chose them for his own purposes and set them apart to be a model for the nations.

Consider ancient history - Egypt tried to destroy Israel in Egypt much as Herod tried to destroy Jesus in his day. Soon after the Exodus, the Amalekites attacked Israel on its way to the Promised Land (Exodus 17). Psalm 83 summarises history in a very precise way: “O God, do not keep silent, be not quiet O God, be not still. See how your enemies are astir. With cunning they conspire against your people, they plot against those you cherish. Come they say, let us destroy them as a nation, that the name of Israel be remembered no more. With one mind they plot together, they form an alliance against you.”

Did you notice that the Psalmist calls Israel's enemies, God's enemies? In another place God said of Israel - ‘he that touches you touches the apple of my eye’. As respected Bible teacher David Pawson said, “Touching Israel is like poking God in the eye.”

Israel was scattered by the Assyrians and then Judah came under Gentile rule in 586 BC and this rule continued more or less non-stop right up until 1967 and the Six Day War when Jerusalem was liberated. Over the millennia, Israel had been ruled by Babylonians, Medo Persians, Greeks, Romans, Muslims and many other lesser powers, culminating in the Turkish Ottoman Empire which lasted for 400 years up until 1917. Following Jerusalem's destruction in AD70 we come to the Church age, most of which does not make for bedtime reading.

The main reason for the Church's hostility towards the Jewish people was because they rejected Jesus. Christians blamed them for ‘killing God’. And yet, Scripture presents a very different scenario, particularly in Acts 4:27-28: “Indeed, Herod and Pontius Pilate met together with the Gentiles and the people of Israel to conspire against your holy servant Jesus whom you anointed. They did what your power and will had decided beforehand should happen.”

Chrysostom in the Fourth Century was esteemed to be the greatest of the Church fathers but he made an outrageous statement against the synagogue and the Jews.

“The synagogue is worse than a brothel; it is the den of scoundrels and the repair of wild beasts, the temple of demons devoted to idolatrous cults, the refuge of brigands and debauchees, and the cavern of devils. It is a criminal assembly of Jews, a place of meeting for the assassins of Christ, a house worse than a drinking shop, a den of thieves, a house of ill fame, a dwelling of iniquity, the refuge of devils, a gulf of abyss and perdition. As for me, I hate the synagogue ... I hate the Jews for the same reason.”

In 1523, Martin Luther turned against the Jews with similar language. He asked the question, “What shall we do with this damned, rejected race of Jews?”

He went on to say, “First, their synagogues should be set on fire. Secondly, their homes should likewise be broken down and destroyed. Thirdly, they should be deprived of their prayer shawls and Talmud. Fourthly, their rabbis under threat of death must be forbidden to teach any more. Fifthly, passports and travelling privileges should be absolutely forbidden to the Jews. Sixthly, they ought to be stopped from charging interest on loans. Seventhly, let the strong Jews and Jewesses be given the flail, the axe, the hoe, the spade, the distaff and spindle and let them earn their bread by the sweat of their noses .. we ought to drive the rascally last bones out of our system ... therefore away with them. To sum up dear princes and nobles who have Jews in their domains, if this advice of mine does not suit you, then find a better one so that you and we may all be free of this insufferable devilish burden - the Jews.”

A leading Jewish thinker, Eliezer Berkovits, made the following comment, “After nineteen centuries of Christianity, the extermination of six million Jews, among them one and a half million children, carried out in cold blood in the very heart of Christian Europe, encouraged by the silence of virtually all Christendom, including that of an infallible Holy Father in Rome, was the natural culmination of this bankruptcy. A straight line leads from the first act of oppression against the Jews and Judaism in the fourth century to the holocaust in the 20th.”

It was the Roman Catholic Church that invented the yellow badge of shame (later used by Hitler) and the ghetto.

The horrors of the Holocaust were summed up in words by Adolf Eichmann that defy human description: “I shall leap into my grave laughing, because the feeling that | have the deaths of five million people on my conscience will be for me a source extraordinary satisfaction.” One wonders whether the current invasion of Islam into Europe might be God's judgment and pay back time? Thank God for Israel!

I have only skimmed the surface of Church history - because you also have the Spanish Inquisition, the Russian Pogroms and the Holy Crusades.

To mention just one incident in Jerusalem when hundreds of Jews were herded into a synagogue by the Crusaders and then set alight, whilst outside they were singing ‘Christ we adore thee!’

It is not difficult to see why the cross is such a symbol of horror to the Jewish people.

One can understand the hostility of the nations against Israel and even more so the hostility of Islam - but the Church - that is a very different story and it beggars belief that such a sustained attack has been maintained over the centuries.

The point is - Israel did not choose to be chosen any more than Abraham asked to be chosen. God chose Israel for his own good reasons and God knew in advance that Israel would fall at the last hurdle, in failing to recognise Jesus as Messiah.

As Gentiles we have three very valid reasons to be thankful to Israel:

1. They gave us our Bibles.

2. They gave us our Saviour.

3. Through their fall the door opened to the Gentiles.

Yes - they failed at the last hurdle, but in every other respect they succeeded. They delivered what God asked of them, except to believe for themselves. The very fact that they continue to be subject to so much hostility proves they are still current in God's thinking - because Satan does not waste energy on what God isn't into.

God's choice of Israel does not in any way invalidate his love for all peoples of the earth. Having opened the door to the Gentiles through Israel's unbelief, God's next plan is to bring Israel full circle and welcome them back into the fold.