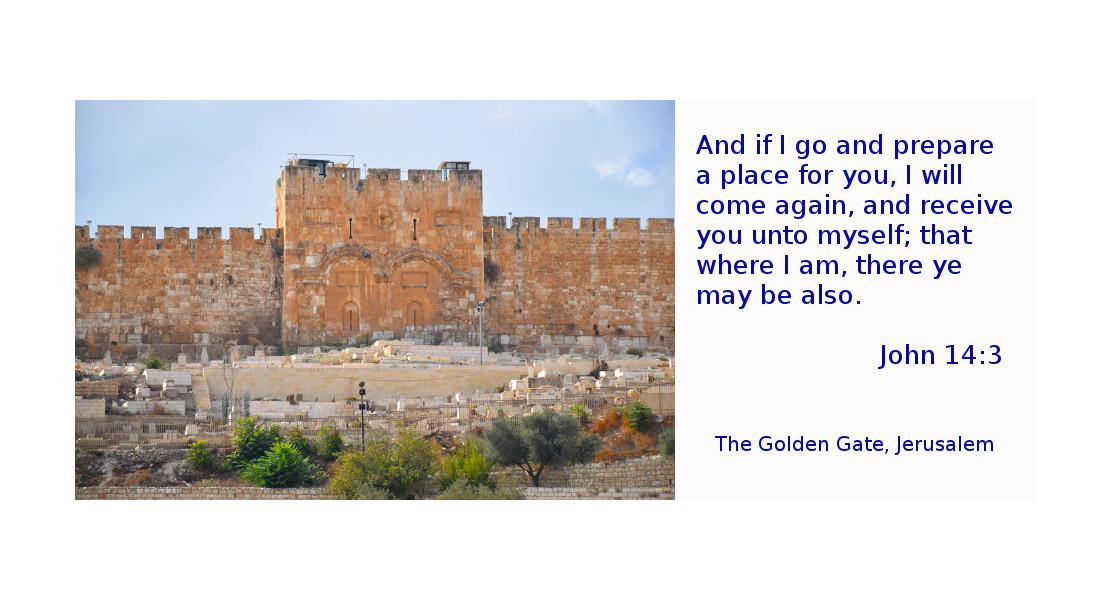 Out of all the gates in Jerusalem the Eastern Gate is by far the most fascinating. Composed of two archways called Bab-el Tobeh (The Gate of Repentance) and Bab-el Rammeh (The Gate of Mercy) this sealed gate has a vital connection with prophecy. It will be through the Eastern Gate specifically that the Lord Jesus will enter Jerusalem when He comes a second time. Let's see what we can learn about this gate of history, mystery and prophecy.

A Gate of History

When Nehemiah rebuilt the walls of Jerusalem, “Shemaiah the son of Shechaniah, the keeper of the East Gate, made repairs.” (Neh.3:29) This Levitical gatekeeper had the exciting task of restoring the gateway that would lead right into the temple itself. Facing the Mount of Olives, it was opposite the site of the Miphkad altar where special sacrifices were made outside the temple compound. The wall was made deliberately lower on this side of the city, so that the priest could look back at the temple and see its doors when he was officiating at this altar. Little did Shemiah know how significant this gate would be! For it was to be through this very gate (also known as ‘the Golden Gate’) that the Lord Jesus Himself would ride into Jerusalem on ‘Palm Sunday.’ The Lord of Glory was to present Himself to Israel as their long awaited Messiah as He made His Triumphal Entry into Jerusalem.

But why did Shemaiah have to rebuild the East Gate in the first place? Sadly, it was due to the sin of Judah before the exile. Ezekiel tells us that the Jews had fallen into idolatry and that this so grieved the Lord, His presence left the very temple where He was to be worshipped. In fact, His ‘glory chariot’ (carried by cherubim) was seen in a vision leaving the temple through this very gateway. “Then the glory of the Lord departed from the threshold of the temple and stood over the cherubim. And the cherubim lifted their wings and mounted up from the earth in my sight. When they went out, the wheels were beside them; and they stood at the door of the east gate of the Lord’s house, and the glory of the God of Israel was above them ... And the glory of the Lord went up from the midst of the city and stood on the mountain, which is on the east side of the city” (Ezk.10:18-19 & 11:23). The Glory left the temple for the Mount of Olives through this very gateway, leaving the prophet Ezekiel wondering if it would ever come back. Perhaps this was why the Jewish remnant used to pray at this gate before later moving to the Wailing Wall. Certainly the Eastern Gate is a gate of history. But it is also ...

A Gate of Mystery

As most people know, the Eastern Gate is the sealed gate of Jerusalem. In fact, the original gateway is also sealed under the accumulated rubble in front of the present East Gate which is visible today1. About four hundred years ago, under ‘Suleiman the Magnificent,’ the Muslims sealed the rebuilt gate in order to prevent the Jewish Messiah from passing through it. They also built a large cemetery in front of it, believing that no Jew would defile themselves by walking through a graveyard (Num. 19). It was a determined effort to stop Biblical prophecy from being fulfilled. Strangely enough, this has served to keep the gate from being used altogether, and today it is sprayed with graffiti calling for the Messiah to come (‘Ba-Ha-Moshiach,’ Come Messiah).

Yet twice in the last century there were attempts to reopen the gate which amazingly failed. The first was in 1917 when General Allenby was about to take the city. The Grand Mufti (the Arab leader) had ordered all the other gates of the city to be sealed up to stop the British from getting in. But he still needed one gate he could use and so told his men to re-open the Eastern Gate. As they picked up their sledgehammers Allenby’s biplane flew over the city dropping leaflets telling the inhabitants to flee. In fear they put down their hammers and ran. What had shaken them? Amazingly, it was Allenby’s name on the leaflet. Apparently, the name Allenby sounds like, ‘Allah’s man’ in Arabic and this filled them with concern. So the gate remained in its sealed condition.”

The second time that the Eastern Gate was nearly opened was in 1967, during the Six Day War. King Hussein of Jordan had conquered the old city in 1948, and wanted to build an Arab hotel for pilgrims, closing off the Western Wall to Jewish worship forever. The problem he faced was that the proposed hotel would be built over the entrance to the Temple-Mount. The king therefore needed to open another gateway to allow Muslim worshipers access to the Al-Aqsa Mosque. To do so he ordered workmen to open the sealed Eastern Gate with air-hammers which would shatter its huge stones. However, just as they were preparing to do so Israeli jets flew out of their underground bases to attack the Arab forces. As the war began, the workmen put down their tools and the gate was never opened! Amazingly, the Eastern Gate remained sealed and has done until this day. Mysteriously, this gate seems to be preserved in its sealed condition.

A Gate of Prophecy

As we have already mentioned, the Eastern Gate will be the very one that the Lord Jesus will use to enter Jerusalem at His Second Coming. When the Millennial Temple is built (and with it new walls and gates), this will be the entrance that the King of kings will use to access His royal residence. Listen to the prophet’s description of that wonderful event: “Afterward he brought me to the gate, the gate that faces toward the east. And behold, the glory of the God of Israel came from the way of the east. His voice was like the sound of many waters; and the earth shone with His glory ... And the glory of the Lord came into the temple by way of the gate which faces toward the east. The Spirit of the Lord lifted me up and brought me into the inner court; and behold the glory of the Lord filled the temple.” (Ezekiel 43:1-6). The Lord was showing Ezekiel that the Glory of the Lord would one day return to the Lord’s house in Jerusalem, and we know from the New Testament that this will be when the Lord Jesus returns at His Second Coming. Once He has made His second Triumphal Entry into Jerusalem the Eastern Gate will then be shut up because of its unique purpose. “Then He brought me back to the outer gate of the sanctuary which faces toward the east, but it was shut. And the Lord said to me, ‘This gate shall be shut; it shall not be opened, and no man shall enter by it, because the Lord God of Israel has entered by it; therefore it shall be shut.” (Ezekiel 44:1-2). The only time this gateway will be reopened in the Millennium is on special feast days (46:1) and it will only be used by the prince of Jerusalem (perhaps the resurrected King David) as a place of worship, “to eat bread before the Lord” (43:3). For the rest of the time it will be kept closed, though others may worship from its entrance on these occasions (46:3). How amazing to think that the Eastern Gate was planned for this purpose, even before David conquered Jerusalem! It is certainly a gate of history, mystery and prophecy.

Surely the psalmist was right when he said, “The Lord loves the gates of Zion more than all the dwellings of Jacob. Glorious things are spoken of you, O city of our God!” (Ps.87:2-3). Those who have entered into God’s salvation through the narrow gate (Matt.7:13-14), which is a picture of Christ Himself (John 10:9), will return with Him to see these wonderful prophecies fulfilled in the future. Will you? If in doubt, “Strive to enter through the narrow gate ...” (Luke 13:24-25), while it is still open, and one day we hope to see you there.

1. Please note: the current wall of Jerusalem is not the original wall built in the days of Nehemiah. The walls and gates have been rebuilt a number of times, mostly in the same positions as before.

2. Though it is a doubtful interpretation, some have viewed this remarkable incident as a fulfilment of Isaiah 31:5: “Like birds flying about, so will the Lord of hosts defend Jerusalem. Defending, He will also deliver it; Passing over, He will preserve it.”