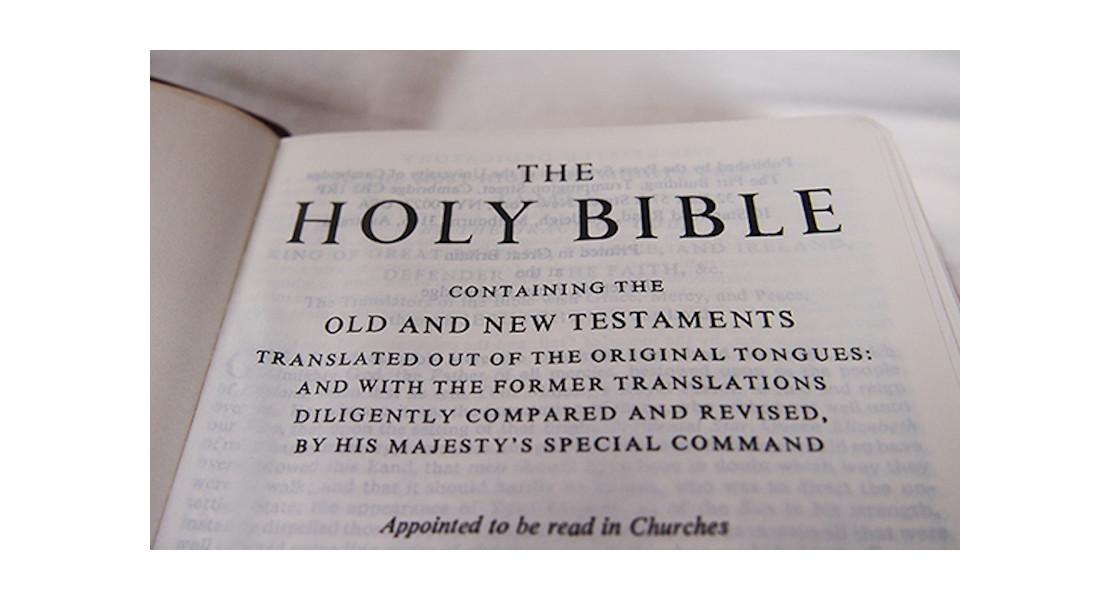 Our Bible: The Most Critical Issue

Christianity is based on a book. It centres in a Person. It expresses itself in a message. It authenticates itself in an experience.

That basic book is the Bible. That central Person is Jesus.

That expressive message is the Gospel. That authenticating experience is the new birth.

Think here about that basic book. Christianity stands or falls with the Bible. It is no use saying, as the liberalists or modernists do, that so long as we have Jesus we do not need an infallibly inspired Bible.

I have said it many a time, and am more sure of it than ever, that the life and death issue of Christianity is the inspiration and authority of the Bible.

If the Bible is only human lore, and not divine truth, then we have no real answer to those who say, "Let's pick the best out of all religions and blend it all into Pan-Deism - one world religion with one god made out of many".

The most devastating blight on modern Protestantism is not its plurality of denominations. The modern ecumenicity movement, which until recently found its loudest voice in the World Council of Churches, has wasted our time with its dreary dirge about denominational divisions while it says nothing about basic heresies which destroy faith in the Bible and create the deepest division of all.

It was because Luther and Zwingli and Calvin and Melancthon and their co-reformers broke through the encrusted mass of medieval superstition, and cleaved their way straight back to the historic sources of the Christian faith in the Holy Scriptures that there came to us the never-to-be-forgotten triumph of the Protestant Reformation. Ever since then, of logical necessity, we Protestants have always been the people of the Book.

It is in the Book that we find the sum and substance of our argument, and the inspiration of all our activities.
To me, it is an awful thing to hear professedly Protestant leaders and preachers talk of the Reformation as though it was a blunder.

If it was a blunder it was the most blessed blunder in Anno Domini history May the good Lord send us another such blunder today! - for it broke the fetters of a tyrannical ecclesiastical totalitarianism and turned millions of slaves into free men. It brought God to men, and men to God, as only an unshackled Bible can.

How important it is, in these days of apologetic vagueness, for Christian educators and school teachers in particular, to have a clear and firm conviction about the Bible! If we are shaky there we are shaky everywhere. Agreed, we cannot say in the classroom all we could wish; but in all kinds of incidental ways we can communicate how lucid and firm our Christian convictions are, especially so in mixing with other teachers.

Eyes watch and ears listen when we are least aware. Often when our witness seems to have least spectacular influence it is having unsuspected effect. Clear, straight-cut thinking about the inspiration and finality of the Bible is of prime importance to any virile witness for Christ.

This is the greatest Book on earth,
Unparalleled it stands;
Its Author God, its truth divine,
Inspired in every page and line,
Though writ with human hands.

We underscore again the inexaggerable importance of the Bible to the Christian faith. Undermine the divine inspiration and authority of the Bible, disprove its historical integrity and doctrinal veracity, and the whole superstructure of Christian ethics totters. That is no overstatement. The more realistically one ponders it, the truer it proves to be.

I am no Bibliolater. I am a trinitarian monotheist.

That is, I worship one God alone; but that God is One in Three and Three in One. I am not a tritheist: I do not worship three Gods, for God is infinite, and there is no room, even in infinity, for more than one Infinite. Nor is my God (the God of the Bible) only a trinity; He is a triunity, One yet Three, and Three yet One. I worship that God, not the bible.

Yet I am a Biblicist in this sense, that as a matter of careful, intellectual conclusion (as well as by spiritual instinct) I accept the whole Bible as the supernaturally inspired Word of God. And in line with that I am persuaded of this, that those scholars and ministers who desupernaturalise the Bible and destroy faith in its divine authority are the biggest enemies of Protestant, evangelical Christianity.

I believe, also, that although they may be sincere men, they are inimical to the wellbeing of our country.

Yes, I hold that our Bible detractors are the enemies of this nation's highest good. The battle for the Bible is not only the most critical issue for Protestant Christianity; it is so for Britain. Big battles are going on all over Christendom today: the battle of Christian ethics versus the "new morality"; of godliness and faith versus the raucus new secularism; of British and American democracy versus an insidious pink socialism and red (though camouflaged) Communism; of traditional decencies versus animalistic social permissiveness.

Underneath all these struggles, the deepest-down contest is the battle for the Bible. We are already seeing in big, bold, ugly conspicuousness what happens when a nation repudiates the moral standards of the Bible.

Christian virtues are mocked at.
Moral safeguards are ripped down.
Social decencies are derided.
Vulgarities and obscenities are flaunted in public.

The sanctity of wedlock is attacked and despised. Womanhood and motherhood are degraded. Free sex and sodomy have already brought venereal disease to epidemic proportions.

City streets and public parks are no longer safe either for women or for men. Graft and fraud, vice and vulgarity, violence and vandalism leer at us everywhere.

Too many of our politicians make no profession of Christian belief any more, and are obviously without spiritual vision, and are "blind leaders of the blind." Ironically enough (yet inevitably) the best-educated nation on earth, having turned away from God's Word, is fast becoming the most superstitious, with millions like silly little poodles running at the heels of astrologers, clairvoyants, and demon-possessed spiritists.

And in our law courts, magistrates and judges, having turned away from the Biblical principles of jurisprudence, and having listened to a crackpot school of psychology, often seem more concerned for the criminal than for the victim.

That was no mere over-simplification. What a nation believes about God will determine, more than anything else, its conduct, its character, its destiny.

That is just as true in Britain today as it is true anywhere else on earth or in history. What a country believes about God (or disbelieves) determines more than anything else, its conduct, its character, its destiny.

What, then, shall we believe about God? Well, if the Bible is what it claims to be, Christianity is the revelation of the one true God in the one true redemption of man.

Christianity is not different from other religions merely in degree: it is different in its very nature. Let it be emphasised: Christianity is the one and only redeeming revelation of God - that is, in His written Word, the Bible, and supremely in His incarnate Son, the Lord Jesus Christ.

The only true God is the God of the Bible; and our nation's treatment of that God and that Book will determine its destiny and seal its fate more than anything else.

During recent times we have seen some pretty staggering examples of what happens when Christian nations turn their backs on the Bible.

We have seen it in Germany, in Britain, Russia. It was the German rationalistic Bible critics who turned young Germany away from the Bible to the philosophy of Nietzsche and paved the way for that monster megalomaniac, Hitler.

It is Britain's listening to those same pseudo Bible scholars and defecting from God's written Word which, more than all other contributory factors, has shrivelled her empire and undermined her prosperity and broken down her moral leadership. Look at Russia under the anti-God, anti-Bible Kremlin.

The biggest country on earth a vast slave-state! What a farcical irony: so-called Communist Russia has no real communism (common sharing) at all. Its subjugated millions all work for a dictator gang called the Kremlin. And if any man dare object he is ground beneath the merciless wheels of the vast, totalitarian juggernaut. Thank God that at last the enslaved millions are rattling their chains against atheist totalitarianism!

Britain will remain a great nation only as it returns to and stays with the Bible. Over In America (where I have now lived for over thirty years) Uncle Sam is sick today. Scarcely has he got over his "growing pains" than he begins to look like a hesitating invalid. He has a creeping disease which will cripple him unless a cure is found. But, thank Heaven, there is a cure.

It is the Bible: the God of the Bible; the Gospel of the Bible; the eternal truths of the Bible; and that glorious, living Saviour who walks to us from the pages of the Bible. If only, in these days of bankrupt secular philosophy and sterile negatives and broken-down morals, we could bring America's and Britain's millions back again to the Bible then, so I believe, the time is ripe for the mightiest spiritual awakening since Pentecost.

Let it be sounded out again: the life-and-death issue is the Bible. More than ever in these days we evangelical ministers and leader: and Christian educationalists need to be men who really believe the Bible, and know the Bible, and preach the Bible, and love the Bible and live the Bible, and, if need be, are ready to die for the Bible. Our Protestant churches are needing a new generation of Bible prophets, not just pulpiteers.

We are needing men who have made themselves experts in putting over the case for the Bible and it mighty truths. Far too many ministers are so busy with secondary matters that they have not time to become the Bible masters and teachers which they ought to be.

When the minister's study becomes an office, the prophet has degenerated into a manager and the pulpit becomes an impertinence. The crying need just now is for prophets, not just preachers; for ministers, not just managers; for men with a passion to put our dear old Bible back where it ought to be in the Christian faith, in the Protestant pulpit in the nation's schools, and in the life of the people. Let all of us help toward that end.