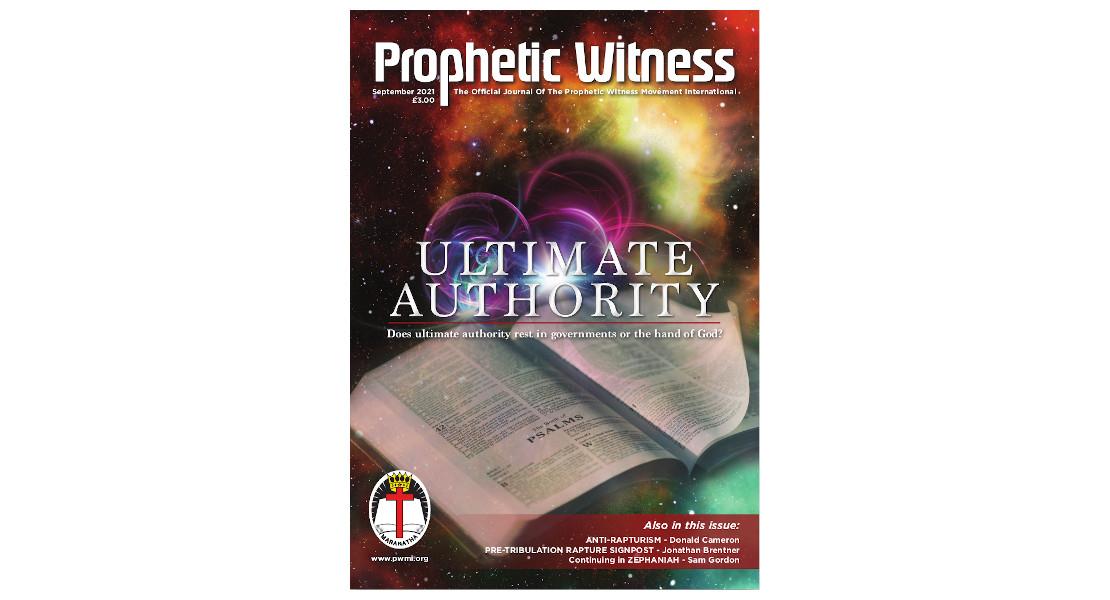 The question is, where or to whom, does Ultimate Authority belong? People living in dictatorships will say that ultimate authority lies with the Dictator, while those living in the democracies will say it lies with the people. However, Bible believing people insist that ultimate authority and power rests in the hands of God, the Creator of heaven and earth. “The Lord has prepared his throne in the heavens; and His kingdom rules over all” (Psalm 103:19). And this was broadly accepted in times past, in so-called Christian lands, but it does seem that a profound change has come, over those same, so-called, Christian countries.

Even the tacit acceptance of a God with whom we have to do, seems to have been air-brushed out of our reckoning. Moreover, whereas there was a general acceptance of properly constituted authority, we are now approaching the situation that resulted in Israel, when “everyone did what was right in his own eyes.”

It is as if a great tidal wave of secular humanism swept over us and left us without chart or compass, or any credible yardstick of judgement. Consequently, restraint is being cast aside, and every man does his own thing.

This impasse may be the result of the pernicious influence of the unbiblical theory of evolution. Although not proven, and indeed not provable, evolution has been the basis of much of the education in our society for many years.

If all things, including man himself, evolved over millions of years and are still evolving, then nothing is fixed or final. Everything is in a state of flux; there are no absolutes, and therefore, there can be no such thing as definitive or objective reality. And God, if there is a God, is irrelevant, so far as human behaviour is concerned.

On the other hand, if the living God created all things, and we are the creatures of His hand, then man is a responsible being who must ultimately answer to the God who created him, To Him, all are responsible, and to Him, all shall give account. Since this same God has revealed Himself, as we Christians are quick to assert, we must attend to what He has revealed. In addition to the revelation we have in Creation, we have His supreme revelation in the Lord Jesus, the living Word of God. We also have in our hands the Bible, the written Word of God, and our final authority in all things!

Powerpoint
From The Editor’s Desk
In Touch
Ultimate Authority
From Our Israel Desk
Anti-Rapturism - Aiding and Abetting the Devil
Our Statement Of Belief
Is The Rapture In Matthew 24?
Signs Of The Times
Church & Branch Listings
Pre-Tibuation Rapture Signpost - Surprise
Zephaniah 2:1-15 ..An Exposition (Part 4)
What In The World Is Happening?
What's On
Book Of The Month