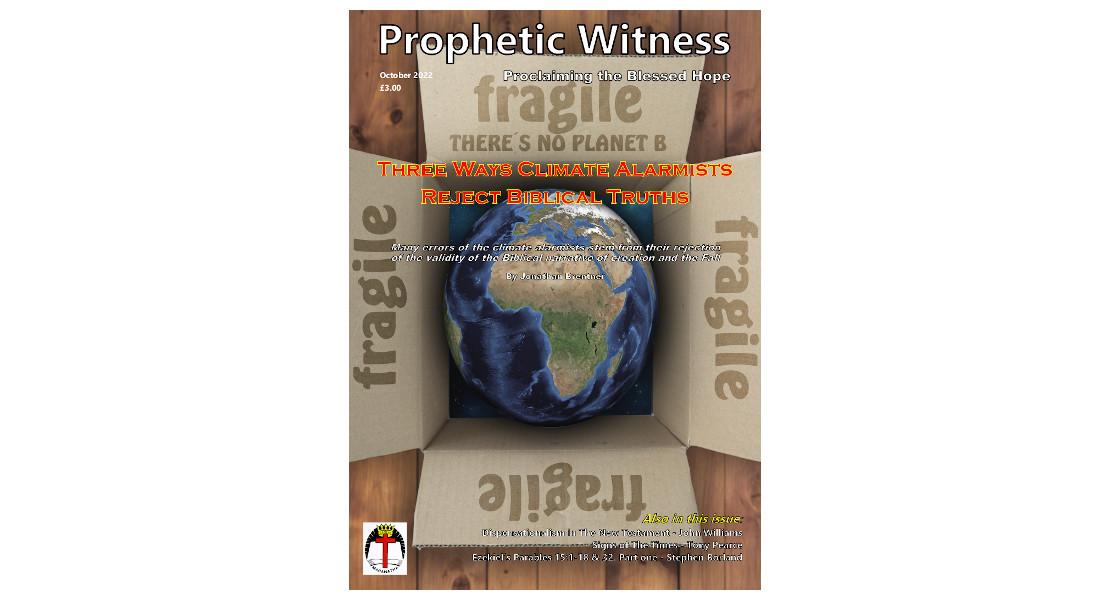 We truly live in an upside-down world. According to many, the most grievous sin one can commit is that of denying that the earth is warming to unsafe levels because of our modern lifestyle.

Julie Kelly, a writer for The Hill, sums up this accusation: “For those of you who don’t know what a climate denier is, it means you either challenge, question or flat-out reject the idea that the planet is warming due to human activity ... Should you remotely doubt the dubious models, unrealised dire predictions, changing goal posts or flawed data related to climate science, you are not just stupid according to these folks, but you are on a par with those who deny the Holocaust.” [i]

The globalists have recently turned up the volume of their warnings concerning climate change. The World Economic Forum (WEF) has come out against private ownership of cars. They already assume that vehicles powered by fossil fuels will someday no longer exist, and due to the shortage of materials to make the electric batteries for future cars, the government will need to step in and control who they allow to own automobiles.

In response to the ongoing push to demonize the use of fossil fuels, as well as those of us who do not accept that a climate emergency exists, I have decided to write a series of articles from a Biblical creationist viewpoint. I believe the most fundamental error of the climate alarmists is that of rejecting what Scripture says about God’s creation, both its past and its future. This is where I will begin in addressing the topic.

1. They reject the story of God’s creation

(Note: the material that follows is adapted from a chapter that I wrote for the book, Lawless - The End-Times War Against the Spirit of the Antichrist. [ii] Please see Lawless for the entirety of my chapter.) Many errors in judgment arise from not knowing the whole story, do they not? When I was in seminary during the late 1970s, a young man and his family began attending a Sunday school class of which I was a part. I soon formed a negative opinion of him based on his appearance; he had very long hair and an earring in his pierced ear (back then this seemed much more radical to me than it would today). I felt great shame when I learned he was an undercover narcotics officer whose appearance helped him fit into the illegal drug culture of the day so he could catch the bad guys.

Likewise, Scripture reveals the grand story of Creation apart from which we cannot fully understand its current state, or, more importantly, discern its future. Many errors of the climate alarmists stem from their rejection of the validity of the Biblical narrative of creation and the Fall, or, as the Bible says, they: “suppress the truth” of what they see in nature (see Romans 1:18–20) or in the sky (Psalm 19:1-4).

God created everything we see around us in nature as well as in the skies. Genesis 1:1 says, “In the beginning God created the heavens and the earth.” In Isaiah 45:12, the Lord proclaims that He: “made the earth and created man on it; it was My hands that stretched out the heavens.”

I love the words of Psalm 50:10-11, “For every beast of the forest is Mine, And the cattle on a thousand hills. I know all the birds of the mountains, And the wild beasts of the field are Mine.” All of nature belongs to God; it’s His to do as He pleases according to His sovereign purposes. Genesis 1 & 2 records the wonders of the Lord’s creative activity, as well as His command for mankind to: “be fruitful and fill the earth” (1:28). God created a perfect paradise for Adam and Eve.

The Book of Genesis reveals another climatic event that helps us understand the current state of nature. It’s what we refer to as the “Fall”, when Adam and Eve disobeyed God, and sin entered the human race. As a result of their sin, the Lord extended their punishment to His creation (Genesis 3:17-18).

As beautiful and spectacular as nature can be today, it does not possess its original glory. Randy Alcorn wrote in the book ‘Heaven’: “We have never seen the earth as God made it. Our planet as we know it is a shadowy, halftone image of the original.” [iii]

Scripture also warns us of the coming Day of the Lord, or what we refer to as the seven-year Tribulation. During this time, God will first judge the world through much damage on the environment through wars, pestilences, and famines (Revelation 6:1-8). Later in this period, His direct judgments on the earth will also wreak havoc with the environment as humanity continues its steadfast rejection of the Lord (Rev. chapters 8 to 18).

But oh, what a glorious restoration awaits when Jesus returns to the earth at His Second Coming! He will reverse the curse on our environment and restore earth to its former glory during His thousand-year reign on the earth (see Romans 8:19-25; Revelation 20:1-10). Isaiah 11:1-10 gives us a picture of this glorious renewal when the Lord reigns over the nations of the world for one-thousand years.

The news for planet earth gets even better. Revelation 21:1 tells us that after Christ’s rule, God will create a: “new heaven and a new earth”, which will be ours to enjoy for all of eternity. Try to imagine enjoying God’s spectacular creation with unending time to do so! That’s our future.

2. They reject a key purpose of creation

The climate alarmists enjoy the sights and sounds of nature just as we do, but they reject a key purpose of creation; ...