Prophetic Witness Movement International
Looking for that blessed hope...
Titus 2:13
May
31
2022
2
min read
A- A+
read 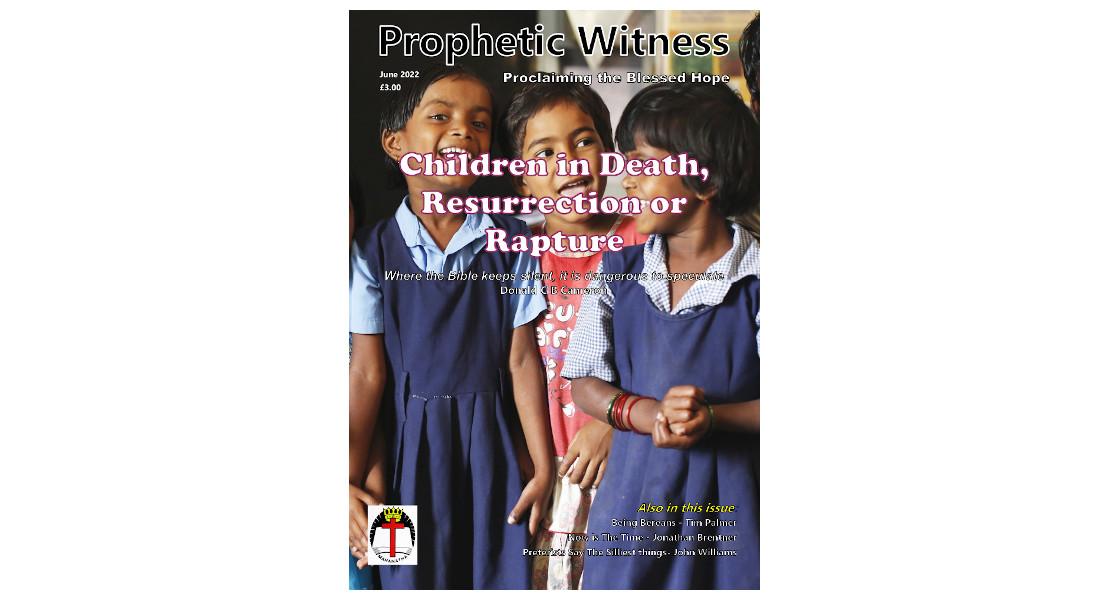 Children in Death, Resurrection or Rapture.

‘Some questions regarding the Christian faith may ‘Seem trivial to those not called upon to experience bitter trials. Having, with my wife long ago, sat for weeks at the bedside of a critically injured child, I empathise with other readers who may have had similar trials and asked similar questions. They deserve to be answered, particularly at a time like this when so many children are dying in Ukraine. In my 2015 book, Rapture Sooner Not Later’ (John Ritchie Ltd), I wrote briefly about Children and the Rapture. Dr Arnold Fruchtenbaum was good enough to write the Foreword. Somewhat to my surprise, since publication, I have not received a single comment of criticism or approval from readers.

Colin LeNoury has covered the subject thoroughly in the 9th of his ‘Burning Questions’ on the PWMI web page, accessible to most readers. I shall be referring to some of the points he has made. Here, I will concentrate on certain related questions still to be faced. Some of these are not confined to the Rapture, but apply also to those who undergo death and resurrection. But Jet us start with the Rapture.

‘The Rapture is the Blessed Hope of all believers (Titus 2:13). Yet not all of us are as eager as we might be. Why? I suspect that most of us have at one time or other been affected by ‘one of the following demotivating factors. Some excuses may appear to be legitimate and others not so, or less so: “Right now I'm at a spiritual low; I wish the Lord would return when I am enjoying a spiritual high.” We forget that when we are having our spiritual high, our brother or sister may be experiencing a spiritual low! That is therefore not a legitimate reason. Spiritual lows do not attract blessing.

“I wish the Lord would wait until so-and-so is saved." This is more reasonable. I suspect that the Lord understands, but I am not sure that He would approve. His Rapture timing will be perfect. Whenever He comes, there will be people in that situation. Let us trust Him in this matter to overrule as necessary.

“My children are too young to understand the Gospel. I hope the Lord will wait long enough for them to be saved.” Probably most of us as parents have been there. This is a sensitive issue to which we can return. “I am/my wife is pregnant. I've no idea what would happen were the Lord to Rapture us today.” Neither have I! We cannot brush this one under the carpet. We must return to it.

Before proceeding, let us remind ourselves that the Rapture is not going to be the last opportunity to be saved, except for those who, aware of the situation, have cynically gambled with their souls (2 Thess. 2:10-12). White I have to wish that any of my loved ones should go through the dreadful Tribulation Period on earth, which is to follow the Rapture, I would rather that they did undergo that period, be saved then, and be included in the multitude of Revelation 7:9, which “no man could number.” Never doubt that the Gospel will be preached after the Rapture, even though membership of the Church, the Bride of Christ, will no longer be possible; ...

(You need to subscribe to read the full article).

Also in the June edition

Powerpoint from Alec Passmore
From The Editor
In Touch with the General Director
‘Children in Death, Resurrection or Rapture’ - Donald C B Cameron
‘Being Bereans’ - Does Doctrine Divide? - Tim Palmer
‘Signs of The Times’ - Tony Pearce
‘The Ultimate Grace Trip’ - part two - Sam Gordon
‘Now is The Time’ - Jonathan Brentner
‘Israel Desk’ - Tony Pearce
‘Preterists Say The Silliest Things’ - John Williams
‘What In The World Is Happening?’
‘What’s On’
‘A Call For National Repentance