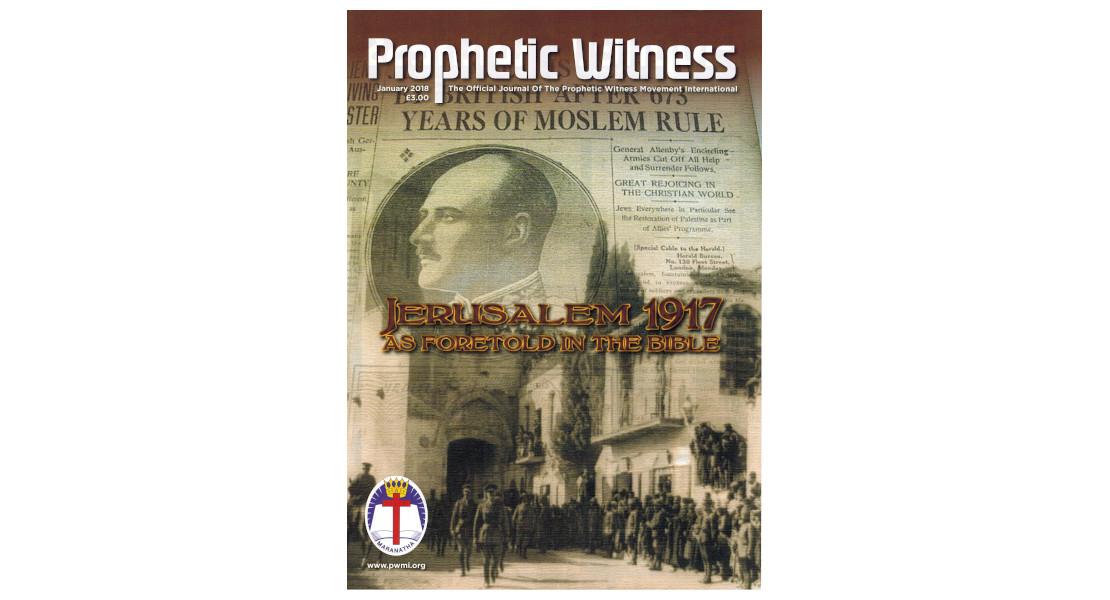 As Foretold In The Bible

by One For Israel

The atmosphere was electric as General Edmund Allenby dismounted his horse in humility, removed his hat in reverence, and entered the walls of the Old City through the Jaffa Gate, which hadn't been in use for many years.

Six hundred and seventy-three years of Muslim rule were over. Iconic footage shows Jewish people welcoming the general as if he was some kind of messiah, and the Land was never the same again. As time went on, Britain‘s ardor for a Jewish state quickly cooled, but the story of how this particular moment came about is one of breathtaking wonder.

After other Muslim (and Crusader) conquests had come and gone, the Turkish Ottomans conquered and ruled over Jerusalem from 1517 to 1917 — in what was then called Palestine, for exactly 400 years. In the Bible, 400 years seems to be a bit of a byword for slavery and oppression — 400 years of Canaanite sin stored up for wrath, 400 years of slavery in Egypt ... and here we have 400 years of Ottoman rule.

The building of churches and synagogues was outlawed, church bells were forbidden; non—Muslims (dhimmis) had to pay the jizya tax. But most catastrophically of all, in 1915 the call had gone out to wipe out every Christian in the Empire. The Armenian Genocide included not only Armenians but also Catholics and Greek Orthodox Christians. One-and-a-half-million were murdered, and many more suffered horrifically before making their escape.

GOD’S STRATEGY GIVEN IN ISAIAH 31

As the Turks were allied with Germany in the First World War, the British found themselves fighting against the fading Ottoman Empire in the Middle East. General Allenby was charged with liberating Jerusalem and had expressed concern to his superiors about the magnitude and sensitivity of the task before him.

He had been ordered to take the city without firing on the people or the city. How on earth was it to be done? “Pray,” the answer came from above, which perhaps did not seem to be very helpful at the time. But Allenby did pray.

Allenby had come across the work of Bible scholar, Dr. H. Aldersmith, who had been studying the prophecies regarding Israel. Aldersmith explained in his book from 1898, “Fullness of the Nations,” that he believed Jerusalem would be delivered by Great Britain in 1917. He had become convinced from Isaiah 31: 4-5 that the UK would have a part to play in the restoration of Jerusalem, and that it would be accomplished by some kind of flying machine.

Aldersmith had arrived at this idea even before the Wright brothers took their first flight in 1903 - airplanes had not even been invented. But fourteen years later in 1917 airplanes were being used (but not commonly), and most people had never seen one. This man’s conviction about Isaiah 31 was Allenby’s inspiration. He would fly planes over Jerusalem, and drop notes written in Arabic saying, “Surrender the city! Allenby.”

There was an Arab saying that, “The Turks will not leave Jerusalem until the river Nile flows in Palestine and the prophet expels them from the city.” Remarkably enough, events conspired to bring these two highly unlikely things to pass. British troops were stationed in Egypt in the years leading up to these events, and Lieutenant General Sir Archibald Murray gained authorization to build a pipeline to pump fresh Nile water and a railway, to supply their troops. By 1917, the water had arrived, along with the troops, in Palestine. Most bizarrely, the River Nile was flowing in Palestine!

Secondly, Allenby air-dropped notes that when written in Arabic, looked like this: “Surrender the city! Al Nabi,” which means “The Prophet.” After the mysterious flying objects sent messages from Allenby (“Al Nabi,”) many of the Turks immediately fled the evening of December 8, 1917. All through the night, Turkish troops were fleeing Jerusalem.

By early morning, December 9, all had gone, and the Mayor of Jerusalem with a small party came under a white flag to surrender the keys of the city. The formal surrender was accepted by General O’Shea, on behalf of the Commander-in-Chief. Jerusalem was delivered and not a shot was fired.

General Allenby officially accepted the surrender at David’s Tower by the Jaffa Gate two days later, and a proclamation was read in seven languages, telling the people they could go quietly and undisturbed about their ordinary business, and all their holy places would be respected.

THE PROPHET HAGGAI POINTS TO A DATE

To find the answer, we need to go back many hundreds of years to the prophet Haggai. Kislev is the ninth month of the Jewish calendar, and if we read the second chapter of Haggai, a prophet who was ministering during the building of the Second Temple, we notice that he highlights that very date three times. Haggai is receiving the word from the Lord on that date, 24th Kislev, and tells us to “consider” that date, or to pay careful attention to it, in verse 10, 18 and again in verse 20.

"God reminds us of his power over all the nations, and his total sovereignty. He can shake the nations whenever he chooses."

The context of the chapter is mainly surrounding the issue of the Temple, of holiness and defilement, and of blessing for his people. God reminds us of his power over all the nations, and his total sovereignty. He can shake the nations whenever he chooses. He promises blessing for the people of Israel and draws our attention quite pointedly to that particular date- the 24th of Kislev. “But from this day on,” writes Haggai, “I will bless you.”

Some believe that the Feast of Dedication, Hanukkah, has its roots in this chapter, since it surrounds the issue of rededicating the Temple. Perhaps this date was significant to the Jewish people even before the Maccabees overthrew the Greeks and cast out their idols from the Temple in 167 BCE.

THE END OF MUSLIM RULE

Either way, the idea of removing that which is against the God of Israel from his holy place resonates throughout the ages at this very time in the Jewish calendar. Is it a coincidence that the Muslim authorities raised a white flag in Jerusalem, the city that God calls “Mine”? Jerusalem on the 24th of Kislev, (Dec. 9, 1917) was liberated, ending Islamic rule.

Moreover, even further back than Haggai, Daniel 12: 12 also prophesied that there would be blessing for Jerusalem after “1335 days.” As one of the British officers was amazed to realize, the Islamic year in 1917 was 1335, since the Muslim (lunar) calendar started in 622. Keen observers of prophecy such as Dr. H. Aldersmith had already put the pieces together, and were expecting redemption and blessing for Jerusalem in 1917. The 1335 years were up. “Blessed is he,” writes Daniel, “who waits and arrives at 1,335 days.”

After 1335 years of Islam, the city of Jerusalem was delivered by the British using airplanes that “hovered like birds” on 24th Kislev in 1917.

(Reprinted with permission from www.oneforisrael.org).

Powerpoint from Dr Alec Passmore
Jerusalem 1917, As Foretold In The Bible
Our Statement Of Belief
Is Modern Israel God's Idea Or Man's?
In Touch
Credo
From Our Israel Desk
The Battleground Of Truth!
Signs Of The Times
Thy Kingdom Come
What In The World Is Happening?
What's On