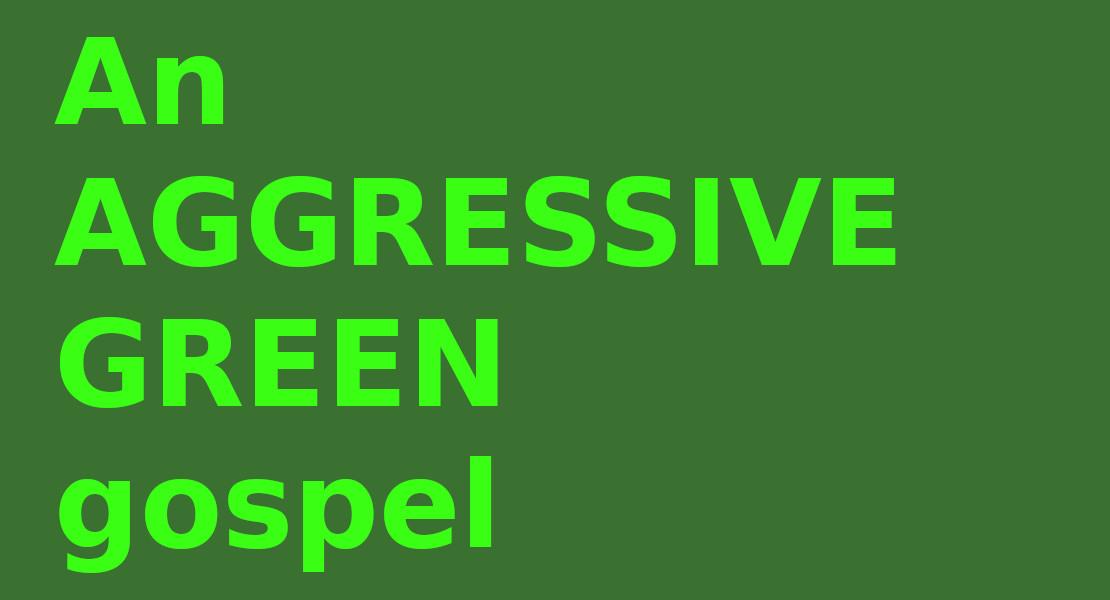 I recently encountered somebody saying that we are to, “embrace a kind of Christian eco-spirituality which has a vision to save the created order”. The writer admitted that it would be a demanding and self-sacrificing task. I asked my pastor the other day how his eco-spirituality was. Talk about blank looks! But this is not funny. The idea is that God creates and we save! Who is behind this colossal diversion from the Gospel of grace? The faith of some seems to be anchored to the earth. Their environmental preoccupation is completely out of proportion with more important doctrines. I recently came across the statement that one of the most basic needs of the human race is to belong in the place or on the land where we can connect, be rooted and grow. This is not Christianity. One thinks of Genius Loci, the pagan belief of the Caesars, where locations were seen as having powerful spiritual guardians.

Certainly God has allocated lands on trust to various people; Deuteronomy chapters 28 to 30 and 1 Kings chapters 8 and 9 have much to say about associated privileges and responsibilities of land occupation. Through sin, Adam and Eve were cast out of the place of constant communion with God; they were never meant to ‘belong’ outside, but they invited expulsion. Paul reminds us of our post-Edenic status regarding the land - that, “while we are at home in the body we are absent from the Lord” (2 Cor. 5:6). We should not be rooted in this world. There is only one mention of ‘healing the land’ in the Bible (2 Chron. 7:14). And the reference is spiritual or moral, rather than an environmental one.

God Himself puts the comparative unimportance of the location into perspective: “Therefore say, ‘Thus says the Lord GOD: "Although I have cast them far off among the Gentiles, and although I have scattered them among the countries, yet I shall be a little sanctuary for them in the countries where they have gone.”” (Ezek. 11:16). God may remove His presence, as He did then: “And the glory of the LORD went up from the midst of the city and stood on the mountain, which is on the east side of the city” (Ezek. 11:23). Our home is where our Lord is, not the place which He has abandoned.

Consider the Bible’s testimony to great men of faith: “These all died in faith, not having received the promises, but having seen them afar off were assured of them, embraced them and confessed that they were strangers and pilgrims on the earth. For those who say such things declare plainly that they seek a homeland. And truly if they had called to mind that country from which they had come out, they would have had opportunity to return. But now they desire a better, that is, a heavenly country. Therefore God is not ashamed to be called their God, for He has prepared a city for them” (Heb. 11:13-6).

What some forget is the immensely important fact that human dominion was lost at the Fall. It seems extraordinary that some recognise Genesis chapter 1 but ignore the consequences of chapter 3 and the Fall. It has become unfashionable to talk of Satan, who is first encountered in the form of a serpent in Eden! Satan enjoys and thrives on invisibility. When we turn to Jesus’ wilderness temptations, we read:

“Then the devil, taking Him up on a high mountain, showed Him all the kingdoms of the world in a moment of time. And the devil said to Him, All this authority I will give You, and their glory; for this has been delivered to me, and I give it to whomever I wish.’” (Luke 4:5-6).

Jesus did not dispute this; He knew that the situation would end sometime beyond the Church age. Man lost the delegated authority in Eden; Satan gained it and has yet to lose it. It cannot be restored by human action. Norman Crawford, commenting lucidly on these Genesis verses, writes:

When Adam was given dominion, it was universal; every creature in heaven and earth and sea came under it. When he fell prey to the devices of the devil, man forfeited his dominion. He turned over the dominion to a usurper and from that day onward Satan has truly been the “prince of this world” (John 14:30). At the present time he is also “the god of this age” (2 Cor. 4:4; RV marg.).

In the meantime humankind has been cooperating with the Devil in polluting God’s creation, and has only recently become aware of how lethal this is proving to be.

Taking care of the planet is no substitute for the way of the Cross.

Only the death of the Man Christ Jesus avails; the dedicated work of others cannot save the soul. Only when Satan is incarcerated following Christ’s Return in Power will man’s dominion be restored and our ecology be righted. In the meantime, ecologists may labour as hard as they can, but cannot regain the forfeited dominion.

Some simply cannot conceive the end of this world. To them our planet is sacrosanct, just because it was good when God created it. The fact that it had been created ‘good’ did not prevent His sending the Flood. What they hope for is not unlike what JWs teach in their Watchtower publication, You Can Live for Ever on Planet Earth! These are not trivial matters. The Bible tells us: “But the heavens and the earth, which are now, by the same word are kept in store, reserved unto fire against the Day of Judgment and perdition of ungodly men.” (2 Pet. 3:7). Of course this is God’s world and deserves respect, but it is not an everlasting world. Evidently God never intended that it should be. When we turn to Revelation chapter 20, we are reminded that John records, “Then I saw a great white throne and Him who sat on it, from whose face the earth and the heaven fled away. And there was found no place for them” (v 11). That is to be a thousand years after the first resurrection. The promised restoration for which people long will have come - and gone by then!

One common problem is the failure to distinguish between this old Earth, in its Millennial restored condition, and the new heavens and earth. We do not have space to look at the new creation in this article, but let us remind ourselves that the new Earth is to have no sea (Rev. 21:1). That is not a restored environment; it is a new and totally different one. This world will indeed be completely destroyed, but emphatically not at or immediately following Christ’s Return. From passages such as Isaiah chapters 11 and 35, we find that the environment is included among those “all things”. Look at chapter 11: “The wolf also shall dwell with the lamb, the leopard shall lie down with the young goat, the calf and the young lion and the fatling together; and a little child shall lead them” (v6). This is a straightforward prophecy taking us back to pre-Fall conditions, not the result of enthusiastic environmental care. “They shall not hurt nor destroy in all My holy mountain, for the earth shall be full of the knowledge of the LORD as the waters cover the sea” (v9); the spiritual restoration precedes the physical, not the other way round. Changes to the earth after Christ’s Return could be as massive as those resulting from the Flood; and it will be the result of God’s intervention, not man’s dedicated conservation, however well meaning.

In Isaiah chapter 35 we read: “The wilderness and the wasteland shall be glad for them, and the desert shall rejoice and blossom as the rose” (v1); well, that’s certainly a restored environment. “Say to those who are fearful-hearted, ‘Be strong, do not fear! Behold, your God will come with vengeance, with the recompense of God; He will come and save you’” (v4); it is God, not some environmental action group who will do this. “It shall be called the Highway of Holiness. The unclean shall not pass over it” (v8); the first priority then, as now, will be dealing with sin, not carbon footprints.

It is not pleasant to expose error, but it must be done, even when the error is sincere, because it profoundly distorts Christian priorities. As we said in Part 1, there is nothing whatsoever wrong in caring for the environment, but when it is presented as a top priority laid upon us by God, it must be challenged. This side of Christ’s Return, trying to improve on God’s programme is a losing battle and it will never work. That is not defeatism; it is believing the Bible.