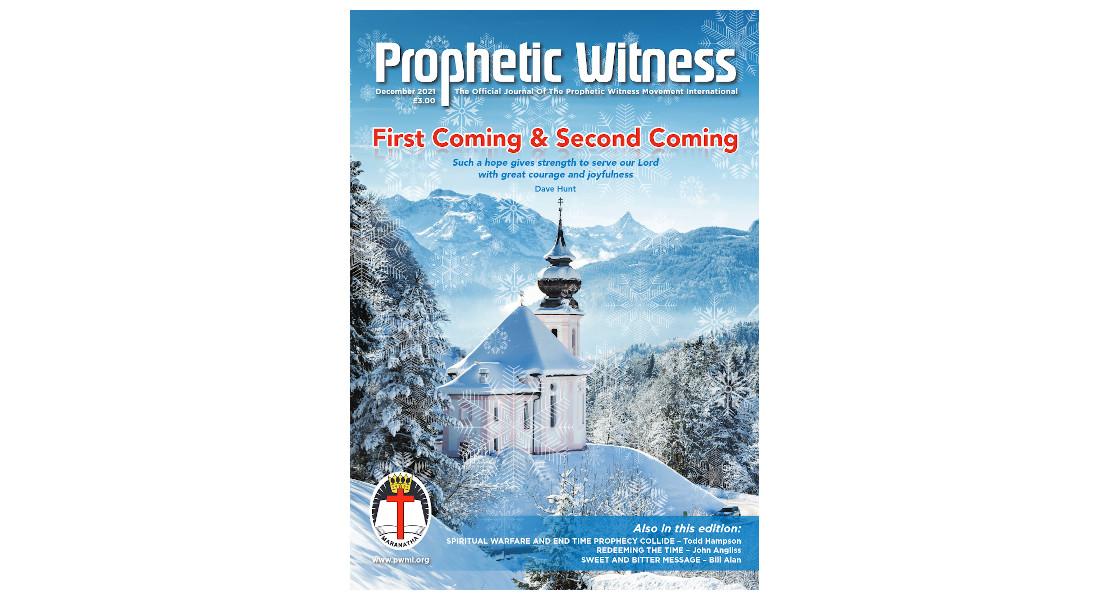 Even the Christmas story being sung and recited at this time of year becomes the victim of the increasingly popular kingdom/dominion/reconstruction teachings we have discussed in recent months. Take for example the story of the wise men (the Bible doesn't say there were ‘three’). Having seen a new star, which they understood signalled the birth of a promised king of Israel, they journeyed to Jerusalem - not because the star led them there (as Christmas songs and stories erroneously say), but because that was where they logically expected a Jewish king to be born. We don't know how they were alerted to watch for the star, but it could have been because of an oral account of Balaam's prophecy (Num. 24:17) handed down among Eastern magi.

The visitors’ earnest inquiry concerning the whereabouts of the new-born king ‘troubled’ Jerusalem. Questioned by scheming Herod, the rabbis pointed out the scripture (of which the magi were also apparently ignorant) that declared where the Messiah would be born: “And thou Bethlehem, in the land of Juda, art not the least among the princes of Juda: for out of thee shall come a Governor, that shall rule my people Israel” (Micah 5:2 as quoted in Matt. 2:6). Instead of ruling Israel at that time, however, as the above prophecy (and others) so conclusively declare He one day surely will, the Bethlehem-born Messiah was rejected and crucified in fulfilment of other Scriptures such as Psalm 22 and Isaiah 53 — and thus He became our Saviour. Nevertheless, unless God is to be proven a liar, Micah 5:2 and similar scriptures must yet be fulfilled. Christ Himself declared, “all things must be fulfilled, which were written in the Law of Moses, and in the prophets, and in the psalms, concerning Me” (Luke 24:44).

Christ chided the two disciples on the road to Emmaus for being blinded by their own folly to what the prophets had so clearly declared. Had they heeded the scriptures they would have known that the Messiah had to be crucified, and they would not have been so puzzled and disheartened the day of His resurrection. And so it is with us today. If we heed only those few scriptures that will be repeatedly read and expounded during the Christmas season, then we will know that just as surely as He came once to die for our sins, so Christ must return to this earth to rule Israel from Jerusalem. Those who deny this, reject some of the clearest verses in the Bible, and refuse to accept one of the most fundamental reasons why Jesus was born into the world. To that extent, they preach ‘another Jesus.’

The second coming of Christ is clearly taught in the announcements of His birth so familiar in the Christmas story. Other scriptures inform us when this great event will occur - in the midst of Armageddon when Israel's Messiah intervenes to rescue her, destroy her enemies and set up His earthly kingdom (Zech. 12:14, Rev. 19:7-20:6), ruling not only Israel, but the entire world from ‘the throne of David! in Jerusalem. Having persisted in unbelief to that moment, the surviving remnant of Israel will recognize their Messiah and “all Israel will be saved” (Rom. 11:26).

Christ will be accompanied at that time by the armies of heaven, among which must surely be His bride, for she never again leaves His side. She has been married to Him in heaven (Rev. 19:7-9), and must therefore have already been taken by the Bridegroom to His Father's house in a pretrib Rapture. She will reign with Him over the earth for 1,000 years — then share the glory and joy of His eternal reign over the entire universe. As part of the familiar nativity story, choirs around the world will once again sing in that awesome finale to Handel's Messiah, proclaiming the glorious truth that ‘He shall reign for ever and ever and ever..and ever!"

Reconstructionists such as North and DeMar deny that Jesus, though ‘born King of the Jews; will ever rule over Israel (which they say is finished as a nation) or that He will personally reign over the Millennial Kingdom. They claim we are in the Millennium now, the Church is in the process of taking over the world, and only at the end of the Millennium will Christ return — not to reign over Israel and the world from Jerusalem, but to ‘Rapture’ the saved and destroy the wicked, While kingdom/dominion advocates believe that Jesus will return to reign over the earth, they insist that He cannot return until they have first ‘restored all things,’ thereby establishing the Millennial Kingdom for Him in His absence. Earl Paulk argues this from Acts 3:20-21, which declares that “the heaven must receive [Christ] until the times of restitution [restoration] of all things...” His error is an obvious one. Clearly the scripture does not even imply, much less state, that Christ must remain in the heavens until all has been restored by the Church, but that He remains there until the time for the restoration has come, at which point He returns to effect the restoration Himself — something the Church was never intended to do, nor could it accomplish this in His absence.

Like the Reconstructionists, the kingdom/dominion advocates also deny that Christ will rule over His ‘people Israel.’ They insist that national Israel no longer has any place in God's plan and that the church is now Israel and has inherited all of her promises. Yet the angel Gabriel specifically declared that the One to whom Mary would give birth, this “Son of the Highest,” would be given “the throne of His father David" and that He would “reign over the house of Jacob for ever.” (Luke 1:32-33). Like Micah 5:2, this scripture in Luke must also be fulfilled.

As the birth of Christ is being given special attention once again at the Christmas season, Christians ought to remember and call attention to the fact that He was born King of the Jews (Matt 2:2). His own to whom He came “received Him not” (John 1:11) and even accused Him of usurping Caesar's place by claiming to be “the King of the Jews” (Luke 23:3). That rightful title given to Him at His birth, however, was still His in death. It was nailed to the cross just above His head and written in Greek, Latin, and Hebrew: “This is Jesus the King of the Jews.” Thus, as the Christmas story is not complete if it only declares His birth, but not His death, so we have failed to understand its full significance unless we remember once again that the One who was born and crucified as the rejected King of the Jews, must yet reign as such in fulfilment of Scripture. Unfortunately, there are still the Pharisees among us who deny the validity of this title today.

At Christmas time the songs and sermons focus almost entirely upon the blessings that have come to those who are in the Church (both Jew and Gentile) through the good news of the gospel. Too often we overlook the prophesied blessings to Israel that were foretold in the Old Testament and pledged anew in conjunction with the birth of Christ. Consider, for example, the prophecy of Zacharias, the father of John the Baptist. Affirming that John would be the forerunner of the Messiah, Zacharias also declared under the inspiration of the Holy Spirit that the Messiah would accomplish God's promise “that we [Israel] being delivered out of the hand of our enemies might serve Him [God] without fear” (Luke 1:74). That promise of a time of future blessing for national Israel is an integral part of the Christmas story — and it will yet be fulfilled, in spite of its denial now sweeping the Church.

Christ is no more pleased with those who today declare that the Church is the true Israel, than He was when He sent through John His letters to the seven churches in Asia. To those who are tempted to embrace this blasphemous teaching that Christians are the real Jews, Christ's words to the church of Smyrna sound a solemn warning: “I know the blasphemy of them which say they are Jews, and are not, but are the synagogue of Satan” (Rev. 2:9). We realize that many also consider it blasphemy to participate at all in the world’s ‘celebration’ of Christmas, and we respect their opinion. Each of us must be true to conscience and God's Word as he understands it. The commercialization of the Saviour's birth by merchants, and the hypocrisy of those who, in the name of Christ, give gifts to one another, but forget those in need, is deplorable.

Nevertheless, at Christmas time, the fact of Christ's birth, life and death for our sins is proclaimed, though imperfectly, to the entire world as at no other time of the year. Christians ought to rejoice in that fact and discreetly use this season for proclaiming the truth, rather than simply denouncing error. While the unfortunate choice of December 25th, set by the Church of Rome in the fourth century, was probably intended (as Chrysostom and Cyprian indicate) as a substitute for the Pagan worship of the Sun-god and the Saturnalia celebrated on that day, the actual result was, a further mixture of paganism and Christianity so characteristic of Roman Catholicism ever since. Some of the Reformers, particularly the Puritans, forbade the celebration of Christmas, and the Pilgrims brought that attitude to America. It is worth noting, however, that Christmas is also vigorously opposed by atheists and humanists. It would be a great triumph for Satan if Christmas could be abolished. Failing that, his alternative plan is its perversion, and he has had much success in that regard.

While seeking to correct error and oppose the many abuses involved in the popular celebration of Christmas, our attitude should remain that of the Apostle Paul: “What then? Notwithstanding, every way, whether in pretence, or in truth, Christ is preached; and I therein do rejoice, yea, and will rejoice” (Phil. 1:18). Paul wrote that from prison, and in the same letter declared in triumph, “Rejoice in the Lord always: and again | say, Rejoice” (Phil. 4:4). May His joy be your strength in the coming year until He returns to take us to be with Him evermore. May that glorious day come soon! In setting our affection on things above instead of on this world, it is helpful to remember the words of David: “In thy presence is fullness of joy; at thy right hand there are pleasures for evermore” (Psalm 16:11). Such a hope gives strength to serve our Lord with great courage and joyfulness.

Powerpoint
From The Editor’s Desk
In Touch
First Coming And Second Coming
Jonah - The Reluctant Evangelist
Church & Branch Listings
Subscriptions
From Our Israel Desk
Redeeming The Time Because The Days Are Evil
Signs Of The Times
Spiritual Warfare and End-Time Prophecy Collide
Our Statement Of Belief
The Sweet and Bitter Message
What In The World is Happening?
What’s On
Book Of The Month