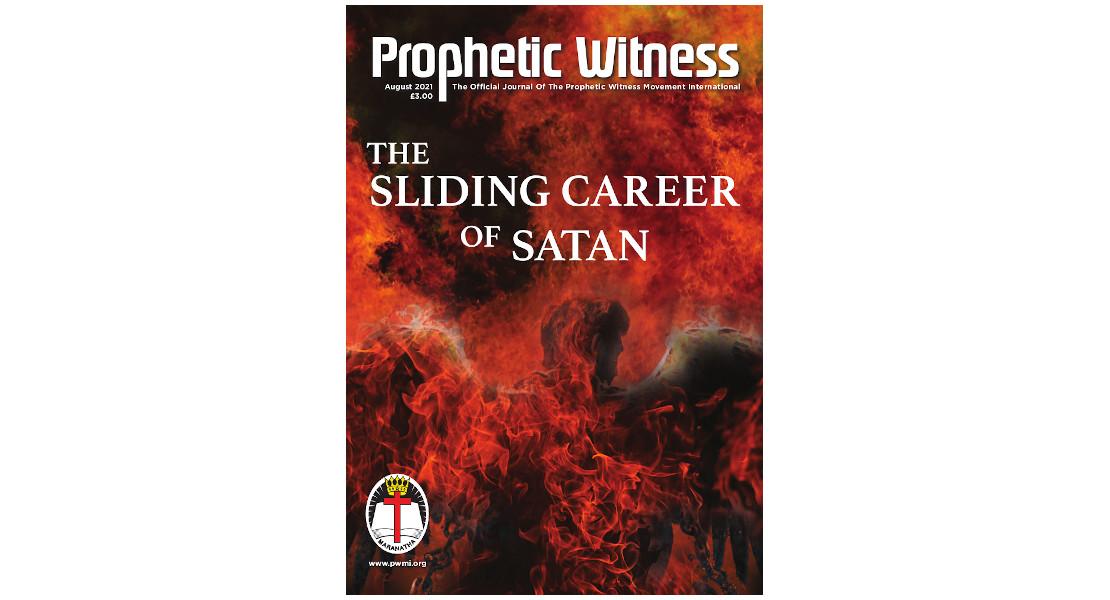 The Sliding Career of Satan

We first read of Satan in Genesis chapter 2 when he appears to Adam and Eve as a serpent, who manipulates and deceives them into eating the fruit that was forbidden to them, thus causing sin and brokenness to enter the world. However, Satan's story started before then, because the great enemy of God was not always the enemy of God. In fact the career of Satan started out quite well. It could be said of him that he worked his way from the top to the bottom, which is exactly what scripture records for us. A created being of great power and beauty, he has been portrayed in many different fashions through the years, and is a very real and potent enemy; and it does the Christian well to know their enemy as revealed in Scripture, and not in Hollywood. The Devil and his fall from glory is laid out through the pages of the Bible, and it makes for an interesting and rewarding study for the student of Scripture who is willing to delve deep into the word of God. This article on the subject of “Satan's Sliding Career”, will briefly examine the past, present and prophesied positions of Satan.

Satan began at the top of the tree, and he is introduced in his past Position in Ezekiel 28:14 as the “anointed cherub that covered”. In scripture we find three orders, or ranks, of the Angelic Order. Firstly, there are the Angels, then there are the Seraphim (Isaiah 6) and finally there are the Cherubim. Angels are found before the Throne of God, the Seraphim around the Throne, and the Cherubim under and cover the Throne. In Ezekiel 1 and 10, the Cherubim were the bearers, or carriers, of the Shekinah glory of God. Satan, however, wasn’t just any Cherub; he was the anointed Cherub, the chief Cherub, the closest created being to God. In other words, he was the highest of all created beings in the Heavenly realm. Satan, looking at his beauty and position, was filled with pride, which was his downfall (Isaiah 14:12-14). When we meet Satan in the Garden of Eden, he is in his fallen state; fallen from his past Position as the anointed Cherub of God. Revelation 12:4 tells us of that fall, and of “the third part of the stars of heaven” that followed Satan in his sliding career path.

Satan cast from his position as the anointed Cherub from the first heaven, to the second heaven (Ephesians 2:2, & 6:12). It is from this position that Satan has access to the first and the third heaven, which is important to understand. Job 1:6 “Now there was a day when the sons of God came to present themselves before the LORD, and Satan came also among them”. Satan in his present position has access to come before God, where he uses this access to accuse the people of God, “day and night” Rev. 12:10. As well as having access to heaven, Satan also has access to earth, in fact scripture refers to him as “the god of this world” 2 Cor. 4:4

While Scripture tells us of the past and present position of Satan, it doesn't leave things there, because there is a future place prophesied for Satan as his career slides further and further down. In Rev. 12:7-12, Scripture records a future war in heaven, one which concludes with Satan being thrown down to Carn. Up until this point, Satan has enjoyed access to Heaven and Earth; but after this battle, that privilege is removed. Cast down from the second heaven to earth for the final three and half years of the tribulation, Satan intensifies his attack upon Israel as the dragon who attacks the woman after his expulsion to earth (Rev. 12:13). The slide down continues for Satan, as Revelation 20:1-3 tells us that, at the end of the tribulation period, he is cast into the bottomless pit for a thousand years. The ultimate destination for the great enemy of God is the lake of fire and brimstone, which is detailed in Rev. 20:7-10 where it tells us: “the devil that deceived them was cast into the lake of fire and brimstone, where the beast and the false prophet are, and shall be tormented day and night for ever and ever”,

Although the scope of this paper doesn't allow for any depth of study into the fall of Satan, it is hoped that the reader's appetite for further study has been aroused. The study of Satan's past, present and future position, is one that should educate and encourage the student of Scripture. It is the account of how one who started at the very top, ends up at the very bottom, as he follows his path of pride, envying and desiring to usurp God's position. It can be truly said, that the career of Satan is a sad and sliding one, as he falls from such a lofty position as the protector of God's glory, to the persecutor of God's people. The sliding career of Satan is a reminder to us all of the sovereignty of God; that the
Lord's side is the winning side, and His way is always the best way. Right from the opening chapters of Genesis, we know the end from the beginning. Even after the serpent succeeds at leading Adam and Eve astray, God declares him defeated (Gen. 3:15), and we see this promise fulfilled in the sacrifice of Jesus. Though Jesus was seemingly dealt a fatal blow, as He gave up His spirit, He crushed the head of the serpent, and we look forward to a day when we will see the promise of the demise of Satan completely fulfilled, and thus his sliding career will be eternally over as he is thrown into the lake of fire, never to hurt or harm anyone again.