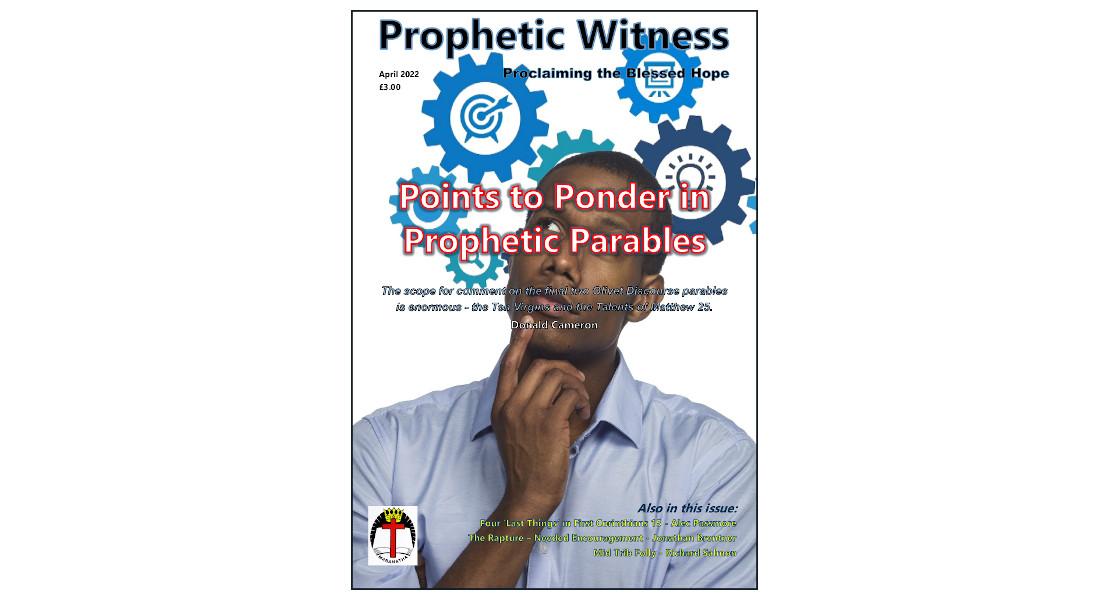 Points To Ponder In Prophetic Parables

The scope for comment on the final two Olivet Discourse parables is enormous - the Ten Virgins of Matthew 25:1-13 and the Talents of verses 14-30. The final section of that chapter from verse 31, is an important straightforward prophecy, when the nations (ethnos or Gentile survivors of the Great Tribulation) are likened to sheep and goats. It is neither a parable, nor is it the ‘last judgment’, whatever the 1611 translators and others since have added as headings. I am devoting more space to the Virgins, as I believe it to be doctrinally and chronologically the more misunderstood of the two parables. Moreover, the timing of the two parables and identity of the personnel involved are, in many respects, the same. I will barely touch on any secondary applications of which there are many. Spurgeon, who was not a great expositor of prophetic truth, but was a great believer in it, once wrote: “It would be well if we all thought more of the great truth of the Lord’s Second Advent. The oftener it is preached, in due proportion with other revealed doctrines, the more likely will it be to arouse both slumbering possessors and sleeping professors of love to Christ. As the midnight of this present evil age approaches, there is increasing need for all to be bidden to listen for the clarion cry, ‘Go ye out to meet Him’.” '

Last month, when we considered our Lord's demands for watchfulness, we said it is easy to assume that, while the Rapture date is totally unknown to the Church, thereafter the date of the Coming in Power will, in theory, be calculable to within a matter of days because of the armies converging upon Armageddon. But the fact that watchfulness is exhorted by Jesus for Tribulation believers, it should make us cautious about this assumption. In those days when the Trumpet and Bowl judgments may have destroyed all satellite communications, many may not be aware of what is happening elsewhere. Writing in 1879, Edward Dennett makes a very interesting and apparently contrasting comment about the Return in Power: “This event will be totally unexpected; buried in profound slumber and deaf to all warning, the world under the strong delusion that has been sent upon it, will have believed a lie, Satan's falsehood, and trusted his masterpiece, the antichrist.” He then quotes Matthew 24:38-39 about life continuing regardless, concluding; “so shall also the coming of the Son of Man be.”

However, there will be one way of determining the timing of the Lord’s Return in Power — the culmination of the seventh week of years of Daniel 9:27 that is measured, not from the Rapture, but from the later signing of the Beast’s false covenant. So much in Revelation and Daniel relates to this timing that we may assume that the 144,000 sealed Jewish Witnesses, upon whom the Holy Spirit will have come, will be fully aware of these divinely confirmed times. ...

(You need to subscribe to read the full article).

Powerpoint from John Williams
From The Editor
In Touch with the General Director
Points to Ponder in Prophetic Parables
- Donald Cameron
Four Last Things in First Corinthians
Fifteen - Alec Passmore
Signs of The Times - Tony Pearce
Mid Trib Folly - Richard Salmon
Israel Desk - Tony Pearce
Is Russia in Bible Prophecy
The Rapture - Needed Encouragement
in Perilous Times
What In The World Is Happening?
What's On
Book Of The Month