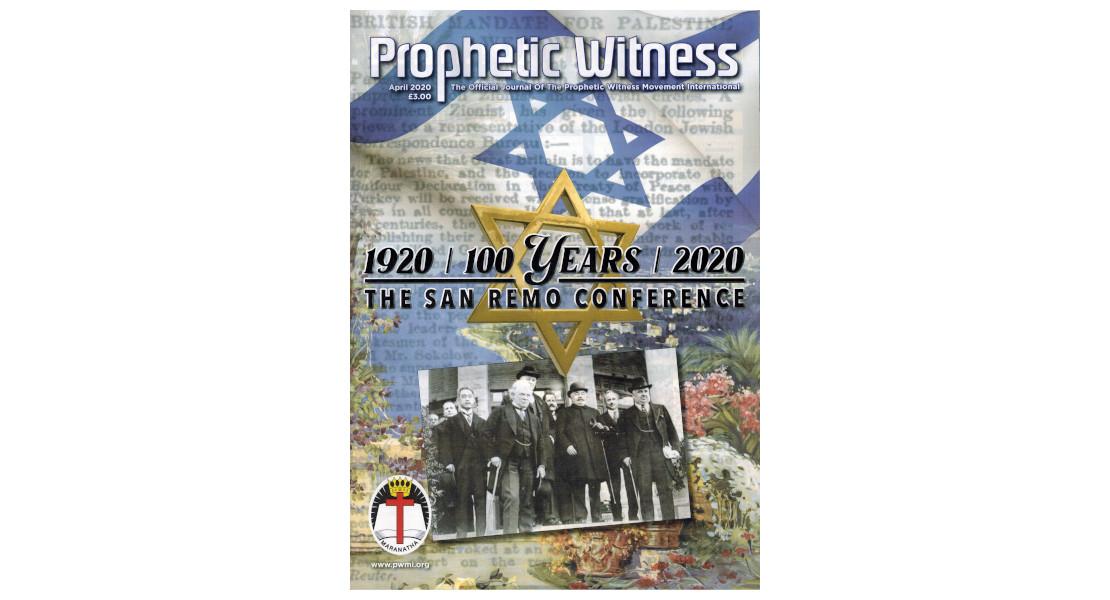 On the North West Coast of Italy lies the beautiful town of San Remo, a popular holiday resort for Italians and other nationals too.

For those of Jewish heritage, San Remo is more than just a holiday resort; it is a place that has great significance in the history and development of the modern State of Israel. Next to May 14th 1948 the most important date in Israel’s latter day development must be surely be Sunday April 25th 1920.

It was on this date that the Supreme Council of Allied Powers, comprising of Great Britain, France, Italy and Japan, concluded their several days of deliberation that resulted in the redefining of the Middle East. Following the end of World War One, the collapse of the Ottoman Empire and Britain’s seizure of Jerusalem from the Turks, plans had to be made regarding the whole of the Middle East region.

Uppermost in the minds of the four great powers (the USA were also in attendance but only as observers), was the famous Balfour Declaration made three years previously, in which Britain had pledged to find a homeland for the Jewish people at the end of the war. Any resolution coming out of San Remo would have to take this into account to gain acceptance from the British delegation. On the said date of April 25th, a 500 word document was released by the Council of Allied Powers, spelling out the conclusions which they had arrived at.

Three Mandates
Three mandates were issued which would particularly affect Syria, Lebanon, Iraq and, most importantly, the area then known as Palestine. It should be remembered that the occupants of Palestine at that time included Jews, Arabs, Turks, Armenians and others. The people group now known as Palestinians today, did not exist at that time. The Palestinian Authority was a much later creation, with no discernible heritage other than the fact that they are Arabs. Of the three mandates the most important one, from a Jewish perspective, was the mandate given to Great Britain to fulfil the Balfour Declaration.

In it, the Supreme Council recognised ‘The historical connection of the Jewish people to Palestine and the grounds for reconstituting a national home in that country’. It also pledged to safeguard the civil and religious rights of non-Jews living in Palestine, as indeed the Balfour Declaration had done. Modern day Israel is one of the most accommodating nations in the Middle East today in that respect.

The San Remo mandate meant that, for the first time in history, Palestine had become a legal political entity. The Jewish people were officially recognised as the beneficiaries of the trust granted to Britain under the terms of the mandate, and the future establishment of a Jewish national homeland became a binding act of international law; these terms were also included in the subsequent Treaties of Sevres and Lausanne in 1923. The remaining parts of the Middle East were granted to the Arabs with equivalent national rights. It should be understood that 96% of the land area under discussion was ceded to the Arabs. Of the remaining 4% set apart for the Jews, this was further cut down by the British during the mandate, limiting the Jewish homeland to that area of Palestine west of the Jordan river, allowing the rest of Palestine to become part of the newly formed Hashemite Kingdom of Jordan. It is also important to note that the current ‘Two State Solution’, ostensibly still on the table, would cut down the Jewish portion even further.

The period of the mandate has been rightly referred to as to as the British occupation of Palestine, and it marks a chequered period in British/Jewish relations. Although welcomed enthusiastically by the Zionists, the mandate soon failed to deliver what it promised, and Britain soon found itself at odds with the people they had been commissioned to help.

There was good reason for this. Firstly, the mandate was opposed by the Arab community in Palestine that was far larger than the Jewish at the time. Secondly, other factors came into play as the 1920s was a period of expansion in the oil industry and Britain and the USA were looking to the Middle East for oil supplies - much of which was in Arab hands. Britain faced great difficulty in trying to fulfil the terms of the mandate and at the same time appease Arab resentment. They ended up pleasing neither side and were looked upon by the Zionists more as occupiers than allies. The mandate came to an end in 1948 when David Ben-Gurion declared the new modern State of Israel into being through the reading of a 17 minute statement in a 32 minute ceremony.

The succeeding years of Israel’s history has been one marked by conflict and negotiation, but without any final resolution. Israel has experienced four major wars, two intifadas and constant military aggression from its Arab neighbours and Moslem sponsored terrorist organisations. At the same time there have been a number of summits and peace talks hosted by various nations and organisations, all of which have failed to resolve the so called Middle East dilemma. Many of these peace initiatives have fallen at the hurdle of Jerusalem - the so called ‘burdensome stone’ prophesied by Zechariah long ago. In both the conflicts and the peace talks, Israel has found itself relatively friendless among the nations and has survived only because of miraculous Divine intervention. The United Nations itself has been quite anaemic in its support of Israel and has passed many resolutions in opposition to the Jewish State.

The San Remo deliberations and their conclusions have often been referred to as the forgotten mandate - rarely does it get mentioned in Middle East discussions today or in the United Nations assembly. One somehow feels that San Remo is an inconvenient truth in the diplomatic exchanges despite the fact that its conclusions are enshrined international law that must of necessity be the basis of any lasting agreement or peace initiative.

How things have changed in 100 years! At the conclusion of the San Remo summit, there was worldwide celebration with tens of thousands marching in the streets of London, New York, Toronto and elsewhere. Only the Arabs in Palestine, stirred up by the Mufti of Jerusalem, registered any opposition. It is from this that the Arab ‘rejectionist’ stance, so prevalent today, had its origins.

So, what of Israel today? Politically, it is still in turmoil and living under the threat of extermination by its enemies who have never accepted the legally binding terms of the San Remo Resolution on Palestine. The concepts of ‘expediency’ and ‘constructive ambiguity’ have dominated all diplomatic efforts, leaving the legal principles of San Remo laying in the files of history. Many Israelis, unaware of God's prophetic plan and purpose, view the future with a certain amount of fear and uncertainty.

Socially, Israel is a diverse country, much more accommodating than many of its neighbours, and is still the only real democracy in the region.

Commercially, it is a prosperous nation, in which the land has been transformed in the hands of the Jewish people. Its exports and growth is good and, despite uncertainty, it still has a thriving tourist industry.

Technologically, it is a very advanced nation and is a recognised world leader in medical research and the development of medical equipment. This is also true of many other fields of technology on which we rely on a daily basis, including the manufacture of components in cell phones and computers. Despite still being in a state of unbelief and rejection of their Messiah, one can see the hand of God is very much upon them, as indeed it was in San Remo in 1920.

“I have much pleasure in conveying to you on behalf of His Majesty's Government the following declaration of sympathy with Jewish Zionist aspirations, which has been submitted to and approved by the Cabinet;

‘His Majesty's Government views with favour the establishment in Palestine of a national home for the Jewish people, and will use their best endeavours to facilitate the achievement of this object, it being clearly understood that nothing shall be done which may prejudice the civil and religious rights of existing non-Jewish communities in Palestine or the rights and political status enjoyed by Jews in any other country. I should be grateful if you would bring this declaration to the knowledge of the Zionist Federation.’”

Powerpoint - from John Williams
From The Editors Desk
San Remo - 100 Years On
The Land Of Israel And The Nations
God's Irrevocable Promise
Standing Order Form
Concerning The Land Of Israel
From Our Israel Desk
The Bread And The Cup
Our Statement Of Belief
The Purpose Of Prophecy
Signs Of The Times
In Touch
What In The World Is Happening?
What's On
Church Branch Listings
Book Of The Month