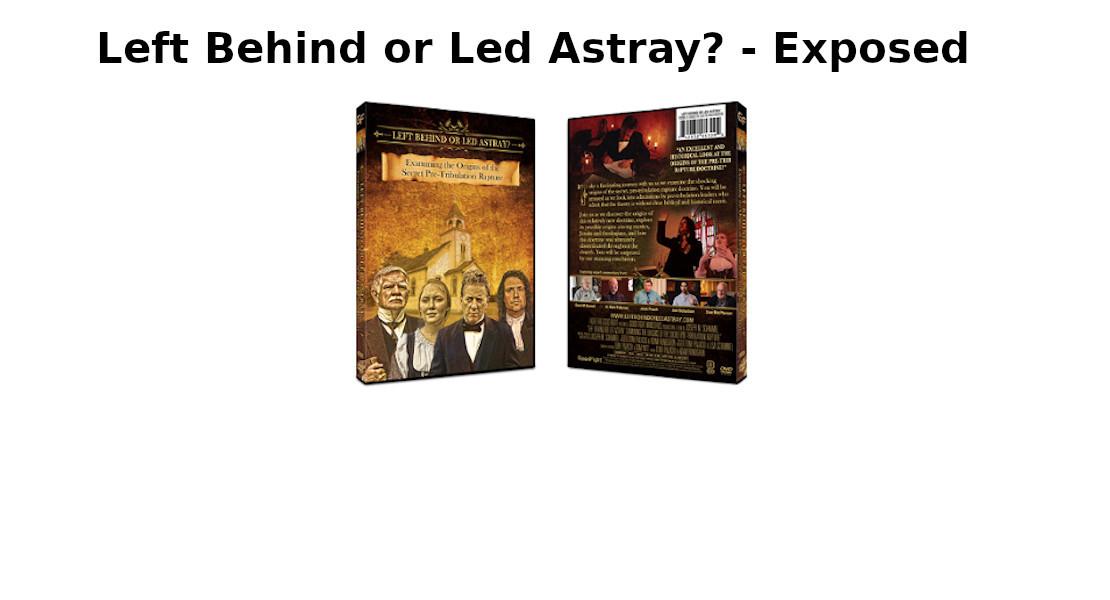 A response from Dr Paul Wilkinson

Left Behind or Led Astray? - Exposed

A new DVD documentary has just been released by Good Fight Ministries entitled, “Left Behind or Led Astray? Examining the Origins of the Secret Pre-Tribulation Rapture.” Good Fight Ministries is run by post-tribulationist Joe Schimmel, the senior pastor at Blessed Hope Chapel in Simi Valley, California. Schimmel’s documentary is endorsed by evangelist Ray Comfort and Kirk Cameron, star of the original “Left Behind” movies. The following write-up appears on the back cover: “Take a fascinating journey with us as we examine the shocking origins of the secret, pre-tribulation rapture doctrine... Featuring expert commentary from David M. Bennett, Dr. Mark Patterson, Jacob Prasch, Joel Richardson, and Dave MacPherson.” The truth of the matter is that the 4 1/2 hour film seriously distorts the historical evidence and is full of false accusations, unsubstantiated myths, and lies.

PWMI is issuing this statement because the documentary includes an interview with our General Director, Colin Le Noury, which has been used by presenter Joe Schimmel to support the assertion that there is not a single verse of Scripture to prove that the Rapture will take place before the seven-year Tribulation period. Colin, who is the only pre-trib leader interviewed on the DVD, clarified that numerous scriptures needed to be tied together when making the argument for a pre-trib Rapture - as is the case with other Christian doctrines - but Schimmel has clearly manipulated the interview to give the impression that PWM, the world’s oldest pre-trib organisation, cannot provide a satisfactory scriptural basis for the pre-trib Rapture.

When Colin agreed to give the interview many months ago, Joe Schimmel did not tell him what the true purpose was. As soon as the official trailer was released back in October 2014, Colin realised that his interview was going to be used to undermine the credibility of the pre-trib Rapture. He therefore made strenuous efforts to contact Schimmel to insist, in the strongest terms, that under no circumstances did he give permission for any part of his interview to be used in the making of the documentary. Colin eventually received an emailed response from one of Schimmel's colleagues, but without any assurance that his interview would be withdrawn.

Among the many false claims and accusations made in Left Behind or Led Astray? are the following:

“a great and good man, an uncompromising champion for Christ's glory and God's truth,” “one of the most remarkable servants of Christ that this country has produced,” “a great man and ever greater servant of God," “a really good man” whose “largeness of heart... showed itself in many ways,” “a man of commanding intellect” who was “tireless in his missionary zeal to teach the Bible,” a man of “simple and unaffected piety; combined with the ripest scholarship and unequalled ability in expounding the Word of God,” “a man of one aim — the glory of God” who was “always maintaining that close communion with the Lord that gave lustre to his testimony and fragrance to his life,” “a man of overwhelming devotion, whose charismatic personality galvanised aches throughout his long life,” a man who was “generous to the wasting of his substance, and possessed of more than martyr courage,” a man capable of “remarkable humility” who demonstrated “an especial sympathy” with children, and a man used by God “to bring cosmos out of chaos for the church of God.” Even Darby critic Max Weremchuk, who is quoted by Schimmel on the DVD, writes in an article that he remains impressed by Darby's “devotion to Christ and his high level of personal holiness.”

“Wilkinson's impeccable documentation and reasoning from Scripture thoroughly refute the myth that Darby got his doctrine of the Pre-tribulation Rapture from a Scottish girl and two Jesuit priests. Primary historical sources cited a herein clearly demonstrate the contrary truth. I highly recommend this excellent treatment of a controversial subject that has confused many.”

"Due to the personal attacks on John Nelson Darby, many believers are confused as to whether they should support Israel... This work by Dr. Wilkinson is a work greatly needed to clarify these issues for many believers and it should be read by all to understand Darby, Zionism, and Israel.”

“Few dedicated Christian scholars with an evangelistic ministry have been attacked more unfairly than John Nelson Darby, who did more to promote the doctrine of the pre-tribulation Rapture of the Church than any other person. Darby did not invent it, of course, for it is both Biblical and ancient, but he popularised it during the nineteenth century. This well researched and readable book carefully sets the record straight and makes a valuable contribution to prophetic studies.”

"In the final analysis, Dr. Wilkinson has restored Darby’s reputation as having been a pious visionary used by God at a crucial time in history to formulate for His Church a comprehensive and coherent theological system that provided the Biblical foundation for Christian Zionism. For any student of ecclesiastical and political history, as well as systematic and historical theology, this book is essential reading.”

“With so much confusion and misinformation today concerning dispensationalism, Christian Zionism, and the role of J.N. Darby, Wilkinson’s work is a breath of theological and historical fresh air. I am deeply grateful for his fine scholarship and the balanced way in which he makes his case. This work should quickly become a standard on Christian Zionism and Darby's influence on this important movement.”

(Note: Depending on your web browser settings, clicking on the above link will either download the pdf document to your downloads folder or open the pdf in your web browser. You may need to have Adobe PDF reader installed to read the rebuttal).