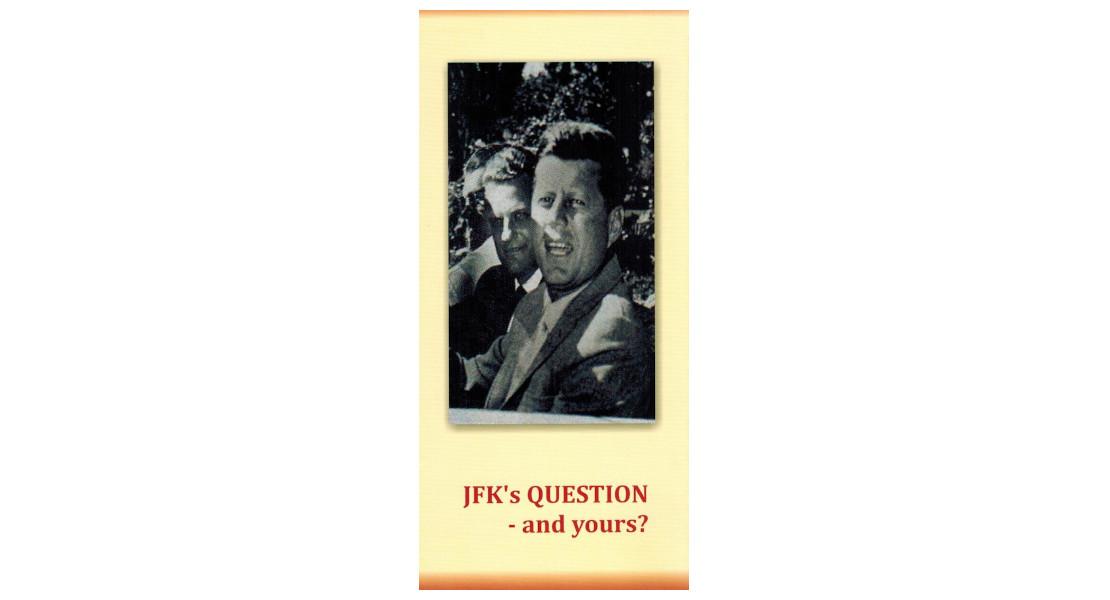 JFK's Question - And Yours?

FIVE DAYS before he became the president of the United States, John F. Kennedy asked evangelist Billy Graham to have lunch and play golf with him. After the game they were driving back to the Kennedy home when the president-elect stopped the car, turned to Billy and said, ‘I want to ask you something. Do you believe in the Second Coming of Jesus Christ?‘ The evangelist replied, 'I most certainly do.‘ Kennedy then asked, ‘Well, does my church believe it?‘ (he was a Roman Catholic). ‘They have it in their creeds,‘ answered Billy. 'They don't preach it,‘ said Kennedy. 'They don't tell us much about it. I'd like to know what you think.‘ And so Billy Graham explained what the Bible said about this great prophetic event. (Sources include: Billy Graham, "Just As I Am" p.395).

How many people today have the same question as the former president — but have no—one to ask? Sadly many churches do not often preach the Lord Jesus' Second Coming and so many people don't know what to expect or how to prepare. This article is designed to share the answers to both those questions.

The Bible tells us that the Lord Jesus Christ will come back to earth a second time. Consider the following quotation found in Acts 1:11. (It was spoken to the original disciples of Jesus after He went back to heaven).

"....This same Jesus, who has been taken from you into heaven, will come back in the same way you have seen Him go into heaven.”

Here we are told very clearly that the Lord Jesus Christ will return one day in the future.

You will notice, as well, that it will be the "same Jesus” and not 'Jesus in another form.‘ That's important because some people are under the impression that the church is somehow the second coming of Christ. Others believe that a 'Jesus—type figure' will fulfil this prophecy of Scripture. Both those views (along with several others) are clearly wrong. It will be the very same Lord Jesus who died on the cross for our sins and rose again who will come back in the future.

1. The Rapture of the Church

The Rapture is a prior return of the Lord Jesus - before the Second Coming to remove His people from the world and take them back to heaven with Him. At the Second Coming He will come back with His church to reign on earth (see Revelation 19:11-16), whereas at the Rapture He is coming for His church in the air to take them back to heaven with Him. We'll see why this is in a moment.

But this 'Rapture' is probably the next event on God's timetable and will result in millions of Christians around the world all being supernaturally removed from earth suddenly at once. The Lord Jesus Himself described this event when He said, "And if I go and prepare a place for you [a reference to heaven], I will come back and take you to be with me that you also may be where I am.” That's found in John 14:3. It will be a wonderful thing for those who know the Lord and are taken to be with Him, but very disturbing for those who are left behind. It would be good to ask ourselves if we will be ‘raptured‘ in that day - or left behind. Please remember, He will only take those who truly know Him as their Saviour and Lord. Do you?

One of the reasons for the Rapture is to rescue the church from something very terrible that is coming on the world, something called 'The Tribulation.‘ This is a period of seven years when God's wrath will be poured out on mankind for rejecting Him and His teaching in the Bible. This period of time will include both natural and supernatural disasters. Reading the book of Revelation, the last book of the Bible, we see things like mega—earthquakes, crashing meteors, and demonic activity on the earth. Some spiritualise away these passages of the Bible, turning them into little more than fables. But when they come to pass they will be all too real. It will be so bad that the Lord Jesus Himself said, "If those days had not been cut short, no one would survive..." (That's in Matthew 24:22). Christians, however, live in hope not fear as they wait for “Jesus who rescues us from the coming wrath.” (1 Thessalonians 12:10). Would you like this hope?

3. The rise of the Anti-Christ

The Bible warns that in the last days, especially during the Tribulation, there will be a world leader who will deceive the majority both politically and religiously. He will set up a world - wide order of government (a 'new world order'?) and eventually - with the help of a false church and a false prophet - lead people to worship him. When he takes power there will be no choices. His word will be law. And the Bible tells us in 1 John 4:3 that the "spirit of antichrist” is already at work in the world getting conditions right for him. He is also written about in 2 Thessalonians 2:1-12 and Revelation 13 which we would encourage you to read for yourself. When he arrives the only choice will be 'Christ or antichrist?’ How much better to choose Christ now.

4. The Second Coming of Christ

At the end of the seven year tribulation the Bible tells us that the Lord Jesus will return in power and glory, defeat the antichrist and his armies at the battle of Armageddon (Revelation 16:16 & chapters 19-20), judge mankind and then set up His physical Kingdom which will be like heaven on earth!

There is, of course, much more to add to these four things but these are the main events.

The most urgent thing for all of us is to be made right with God so we are ready to meet Him, whether that be at death or the rapture of the church. And to be made right with God means we need to have the issue of our sins dealt with. You see, the Bible says we are all sinners - people who have broken God's law. And that's no small thing. If God banished Adam and Eve from the Garden of Eden for just one sin, then what chance do we have of getting to heaven by our own goodness? We need another way, one that doesn‘t depend on us. That's where the Lord Jesus comes in. The Bible tells us, “For God so loved the world that He gave His only begotten Son, that whoever believes in Him should not perish but have everlasting life.“ (John 3:16). God gave His Son to be our Saviour (rescuer). He lived a perfect, sinless life and then died on the cross for our sins. Because He had no sin of His own He could pay for ours and open the way for us to go to heaven. Today if any person puts their trust in the Lord Jesus‘ saving work rather than their own good works - and ask Him to become Lord of their lives - God will forgive them and receive them as His children. Why not do this today and be ready for what lies ahead? John F. Kennedy told Billy Graham, "We‘ll have to talk about that someday.” But as far as we know he never did. Please don't put this off. Call on the Lord today.